Teacher strike compared with those by doctors

TEACHERS currently on strike risk more than doctors who have done so in the past, as they are easier to replace. 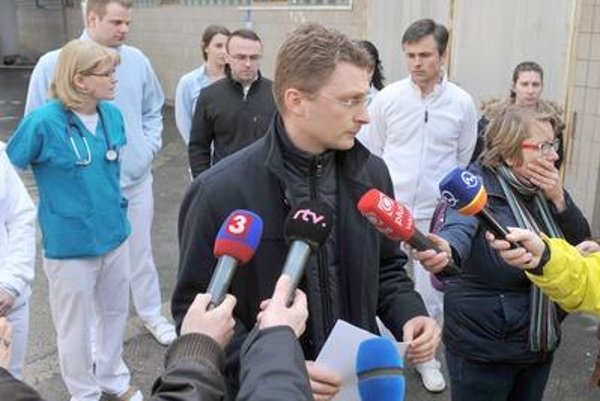 On the other hand, they have the advantage that most people do not consider them greedy for seeking higher salaries, say organisers of past strikes approached by the Sme daily. They also opined, though, that many Slovaks still show little solidarity with workers from another line of work.

“Abroad, I witnessed a joint strike of nurses and energy workers, and this is something that is still missing in our society,” said Mária Lévyová who until 2013 was the president of Slovak Chamber of Nurses and Midwives.

Teachers made a mistake in that they timed the strike for a period after budget had already been approved, Lévyová said. But they could at least achieve an agreement that would guarantee some of their requirements in the future, she added.

“You can hardly expect someone to give them €400 million now, so that they can have higher salaries,” she explained. “But they should have in their pocket at least something which they can bring with a clean slate and insist on it being fulfilled.”

“There is always someone who says the timing is bad: after an election, it is poorly timed, as government has no time to handle these issues, in mid-term, negotiations are held, and the last year is always perceived as the time before election,” he added.

In 2012, researchers at the Academy of Sciences together with the Methodical-Pedagogical Centre surveyed Slovaks on they perceive teacher demands for increased pay. About 33.9 percent agreed their salaries were too low.

Today, these numbers would be probably different, as the support for teachers by public is not unequivocal, but definitely stronger than in the past, according to Branislav Pupala, a researcher of the Institute for Research of Social Communication at the Slovak Academy of Sciences who participated in the survey.

“People have become more sensitive to the problems of striking teachers,” Pupala said. “And a younger generation of teachers, who are more trustworthy for the public than a typical communist-era teacher, is more attractive for them.”

The crucial aspect for organising a protest is not just to demand something but also to offer solutions, Visolajský stressed. Thus, teachers should also push for systemic changes. Doctors and nurses agree that the hardest thing in a protest is to persevere and protest organisers should try to be constantly in contact with teachers.

“The hardest work for me during doctors’ protests was to keep the resignation notices intact,” Visolajský said. “Every day, I received many calls, and each time my mobile-phone rang, I feared someone might withdraw his or hers.”

One cannot say whether the strike will fall apart in a few days, or not; but teachers are already successful, as public is debating their problem, Kollár said. The joint interest of government and public should be to seek and find compromise – be it before or after an election, he continued.

“From now on, everyone will have to accept the fact that when teachers get angry they can stand up for their cause,” Pupala added.