There are many lessons learned from past experience. The first is to ensure that newcomers can work when they arrive. 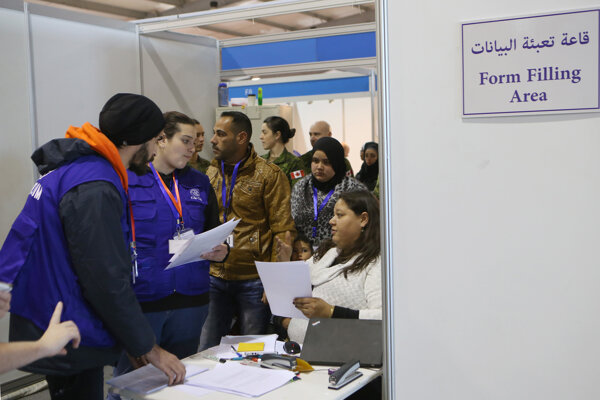 Canada has announced that it will take around 25,000 Syrians from Jordan, Lebanon and Turkey. (Source: AP/TASR)
Font size:A-|A+30

As of January 23, Canada has now welcomed more than 12,425 Syrian refugees to our country as part of the #WelcomeRefugees initiative, bringing us closer to our goal of welcoming 25,000 Syrian refugees by the end of February 2016. Thousands more have applied to come to Canada and their applications are being processed by Canadian officials. Their stories have been featured on television, in newspapers, magazines, in front of church groups and in community centres across the country. The personal tales are full of misery and hardship, separated families and lost dreams. But in Canada they will start to build new lives with the support of Canadians around them, many of whom were immigrants themselves at one point in time.

The Canadian Minister of Immigration, Refugees and Citizenship, John McCallum, said that people across the country were working “day and night…opening their communities and their hearts to welcome them.” When the first Syrian refugees arrived in December 2015, Canadian Prime Minister Justin Trudeau was at the Toronto airport to receive newcomers escaping war and trauma in their homeland. The Prime Minister handed out winter jackets, boots, hats and mittens saying, “this will keep you warm, welcome to Canada.” Canada committed to identify, transport and provide integration services for 25,000 Syrian refugees by the end of February 2016 as part of the #WelcomeRefugees initiative and we are on track to meet this target.

Canada has extensive experience integrating newcomers. We are a land of immigrants and we celebrate multiculturalism. For Canada, accepting nearly 250,000 new immigrants every year for the past 10 years has greatly enhanced the richness of the cultural fabric of our country.

There are many lessons learned from past experience. The first is to ensure that newcomers can work when they arrive. As part of the #WelcomeRefugees initiative, refugees have full permanent resident status upon arrival in Canada. What this means is that they have the right to:

•           Most of the social benefits that Canadian citizens receive, including health care coverage;

•           Protection under Canadian law and the Canadian Charter of Rights and Freedoms.

There are also responsibilities that come from being a Canadian permanent resident. These include paying taxes and respecting all Canadian laws at the federal, provincial and municipal levels. The two things that distinguish a permanent resident from a Canadian citizen is the fact that a permanent resident cannot vote or run for political office and that they must live in Canada for at least two years of every five year period to maintain their status.

The second lesson learned from our experience in welcoming refugees in Canada is the importance of medical and security screening. A full immigration medical examination, including screening for communicable diseases such as tuberculosis is conducted. As with other permanent residents, refugees may be medically inadmissible to Canada if their health is a danger to public health or public. Our screening process has proven effective. It includes comprehensive interviews and the collection of detailed biographical information and biometrics to confirm identity. Officials check this identity across a range of databases. All of this is done before refugees arrive in Canada. In an effort to maximize the success in resettlement while minimizing security risks, Canada is prioritizing immigration approvals for complete families, women at risk, and persons identified as vulnerable due to membership in the LGBTI community.

For the Canadian government, this is primarily a humanitarian effort. In Syria, after four years of war, over 11 million Syrians – more than half the population – have been driven from their homes and over 250,000 have been killed, including over 12,000 children. The Syrian people have been terrorized and killed by their own government, ISIL and other extremist groups. Under the rule of Bashar al-Assad, the regime has used chemical weapons on its own citizens, and is responsible for torturing and killing hundreds of thousands of people. Inviting refuges to resettle in Canada is one part of the equation. In addition, Canada has committed over $969 million in humanitarian, development and security assistance in response to the Syria crisis. The Government of Canada will invest up to $678 million over six years towards expediting the resettlement and ensuring integration support for these Syrian refugees.

It is important to keep in mind that even though we have taken on this ambitious humanitarian effort, Canada will continue to process applications and accept immigrants and temporary residents in all categories. Canada has several multi-year refugee commitments that we have already met or are continuing to pursue. These include:

What we have learned from the experience of welcoming refugees and providing them with access to settlement services funded by the government, is that this helps with integration. If refugees are happy and feel like they are part of an inclusive Canadian society, security risks will be minimized. As part of settlement services, refugees have access to free language classes; employment services such as help finding jobs; professional mentorship programs and workshops that focus on the requirements for building a successful life in Canada and fully integrating into Canadian society. Prime Minister Trudeau said that the accelerated refugee integration program is possible in Canada, “because we define a Canadian not by a skin colour or a language or a religion or a background, but by a shared set of values, aspirations, hopes and dreams that not just Canadians but people around the world share.”

Another element in welcoming refugees and immigrants from all over the world to Canada is economic. Consistently, the research on the Canadian experience demonstrates that immigrants are essential to economic growth. In Prime Minister Justin Trudeau’s speech to the World Economic Forum in Davos, he emphasized the need for societies that recognize diversity as a source of strength, not a source of weakness. Our Prime Minister stated that diversity is something leaders can do much about and that it wasn’t just sound social policy but that it was the engine of invention. It generates creativity that enriches the world. We believe it is possible to embrace diversity and the new ideas that spring from it, while simultaneously fostering a shared identity and shared values in safe, stable communities that work. As he concluded, “The result is creativity that enriches Canada and the world.”

For proof, plan a visit to Canada!