SEVERAL hundred people including teachers, parents of pupils and the general public gathered in Levice on January 27 to support the ongoing teachers' strike. 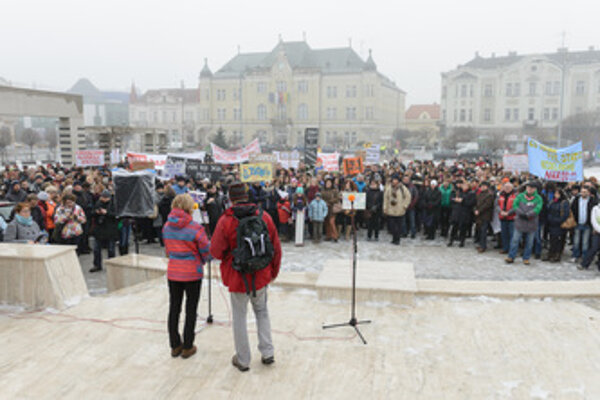 Teachers from the Slovak Teachers’ Initiative (ISU) and representatives of parents, who took the floor in turns, urged increased funding for the education sector and the adoption of systemic measures to bolster the sector’s quality.

“We realise that education and health care are the two most neglected areas,” ISU’s head Vladimír Crmoman said, as quoted by the TASR newswire. “If we don’t make investments in the education and health care sectors, we’ll be sick and dumb. Our results in PISA testing [OECD’s Programme for International Student Assessment - ed. note] are some of the worst, our life expectancy is among the lowest. These are critical indicators that Government representatives should take into consideration.”

He then recalled that teachers went on strike in 2015. which was followed by a “relay” strike, and that although they (the teachers) keep sending petitions and appeals, very little has been achieved. “The money is there, but there’s reluctance to change things, so we have to force the politicians to change that,” said Crmoman.

The rally in Levice (Nitra region) is only one in a series of events that teachers have planned following a demonstration in Bratislava on January 25, acccording to Crmoman. A march in Topoľčany (Nitra region) was also held on January 27. Another rally is scheduled to take place in Nové Zamky (Nitra region) on January 28, and gatherings involving teachers and parents are also planned in Košice and Banská Bystrica.

The teachers are ready to stand firm for as long as necessary, he said, adding that 11,800 teachers and over 800 schools have signed up for the strike, based on the latest figures.