Hamšík in pursuit of Maradona

Marek Hamšík, captain of the Slovak national football team, is in great shape this season, not only in the national kit, but in his club SSC Napoli as well. 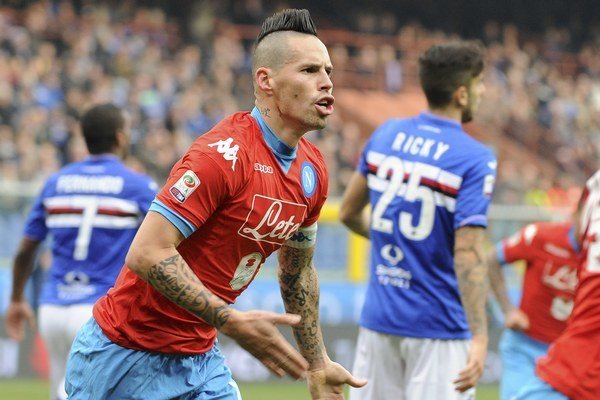 Although this 28 years old Slovak player born in Banská Bystrica is a midfielder with mainly constructive tasks, his striking abilities are more than apparent and he proved it also this Sunday, when he scored after an individual action finished with an audacious slap. This goal, which meant an important two goals lead (3:1) for Napoli in the game against Sampdoria, was declared as the most beautiful goal of the last 21st round.

It is undeniable that Gonzalo Higuaín with his 21 goals in the on-going season is the most prominent player of the current leader of the Serie A, but Hamšík is undoubtedly another crucial pillar of the Neapolitan team.

The goal on Sunday represented a jubilee 80th goal in the Italian league for Hamšík in the kit of SSC Napoli, which means that now he is just one goal behind the Argentinian legend, best football player of the 20st century, Diego Armando Maradona. Taking into account the current form of the Neapolitan team and Hamšík himself, it is probably only a matter of short time until Hamšík surpasses Maradona in this statistic.