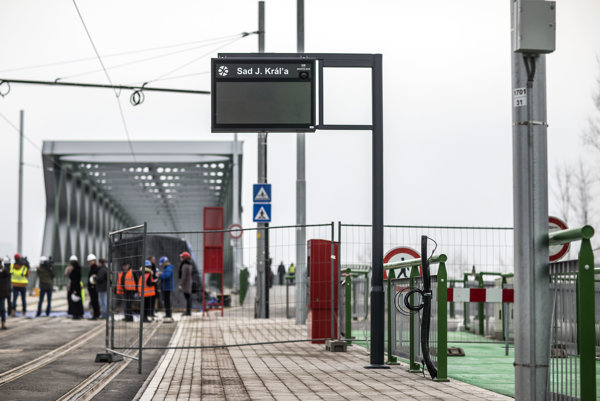 Construction work on the new Old Bridge finished in mid December and even though Bratislava Mayor Ivo Nesrovnal promised to open it for pedestrians in early January, it has yet to happen. With final inspections underway January 20, the City Council is reticent to say when it will.

“We are pushing so that the final building approvals are over as soon as possible; so that Bratislavans can use the Old Bridge not only for passing on foot but also for tram transport,” Nesrovnal told the Pravda daily. “But until final building approvals are complete, the bridge will be not accessible to the public. This is true also for the tram transport from Old Town to Petržalka and car transport via Štúrova Street.”

Bratislava City Council Spokeswoman Ivana Skokanová told Slovak Radio that the bridge might be opened for pedestrians through February, but that it is premature to speak about the launch of tram transport via the bridge. 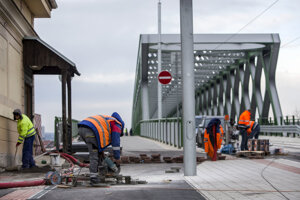 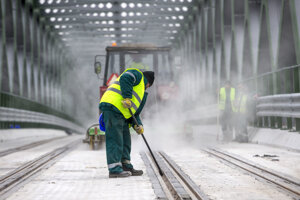 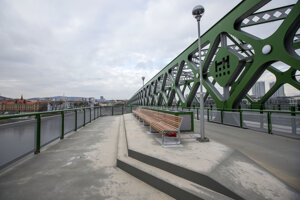 What used to be the oldest bridge in Bratislava is a major part of the planned transport system connecting the city centre with Petržalka on the opposite bank of the Danube River. The first part of the project was divided into two phases included rebuilding of the bridge and laying down new rails on Štúrova Street and Šafárikovo Square via the bridge up to Janíkov Dvor in Petržalka. The second phase will include building the tram line via Petržalka.

During the re-building of the bridge, two pillars were replaced by one, which extended the shipping lane on the Danube River to 140 metres. This will enable to sailing ships to move under the bridge.

The whole reconstruction project costs nearly €59 million excluding VAT, of which 85 percent is financed from the European Union funds, 10 percent from the state budget, and 5 percent from the city budget. In order to receive the EU money, it was necessary to complete the bridge and invoice the works by the end of 2015.

Searching for the new name

The Old Bridge is now actually the newest bridge in Bratislava. But as its original name referred to its age, there are proposals to rename it. It was opened as the Bridge of Franz Joseph I in 1891. Later it was the Bridge of M. R. Štefánik, the Bridge of Red Army and only from 1990 was it called the Old Bridge. Among proposed names is the Bridge of Ľudovít Štúr but also the Bridge of Emil Gallo, the man well known from the iconic photo by Ladislav Bielik, on which Gallo stands with bare chested in front of a tank’s cannon on Šafárikovo Square, where the bridge ends.

The city council has opened a petition for people, who can by the end of January send their proposals for the new bridge’s name. Afterwards a commission will choose the name.

Bratislava councillor Ondrej Dostál recalled that leaving the selection of the new name to the public is not the best solution when some years ago people in an internet petition named a bridge over the Morava River in Devínska Nová Ves as the Cyclobridge of Chuck Norris. In the end councillors chose the Cyclobridge of Freedom.

In the meantime the city council is working on the second phase of the transport infrastructure project.

“The tram line [in Petržalka] will be installed into the existing infrastructure and joined to already existing city public transport so that  tram transport from Petržalka to Old Town is maximised [by passengers],” said Skokanová as cited by the TASR newswire.

The city council is preparing a meeting with citizens in February at which they will introduce the project. It is not clear when the tram line will be completed but it must be until the end of 2020 so that EU funds can be used.

The tram project in Petržalka is for now the latest public transport project in Petržalka. During the communist regime, Bratislava planned to build a subway system, but later this project was evaluated as too expensive and cancelled. Former mayor Milan Ftáčnik as well as current mayor Nesrovnal indicated that tram-trains, a light-rail public transport system, might run in Bratislava.