ANOTHER 10 Slovaks joined those who have received the Yad Vashem (Righteous) title on January 27. 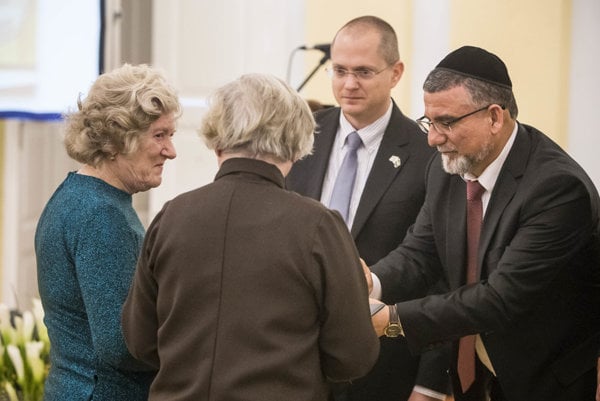 Two daughters of Jozef Krajčovič and his wife Anna taking an honour for their parents who helped Jews during World War 2 from Zvi Aviner Vapni, the Ambassador of the State of Israel (Source: SME )
Font size:A-|A+37

Those five families joined 546 brave men and women from Slovakia and almost 26,000 people from all over the world who have received the designation.

The Embassy of the State of Israel in Slovakia published their stories during a ceremony taking place in Bratislava to mark International Holocaust Remembrance Day. President Andrej Kiska attended the event.

“The stories are about ordinary people that never planned to become heroes and were unprepared to take risky decisions,” Zvi Aviner Vapni, the Israeli ambassador, said at the event. “They were ordinary human beings, but it is precisely their humanity that touches us so, and should serve as a shining example.”

Ján Varga and his wife Anna were honoured for saving František (Efraim) Neumann Götz, who also went by Jozef. To hide from Nazis, Götz settled in the village of Petrovce, whose residents were Evangelicals, and where a few Jews and partisans were hiding already. He turned to the house of Ján and Anna Varga, following the recommendation of Ján Varga’s sister Anna Peterová and offered his services to them.

“As everybody in the village was against the Nazis, we were able to stay there,” embassy’s press relase quotes Götz. “I was given completely different clothes, the same kind of clothes local people in the village used to wear, so that the Germans wouldn’t recognise I’m Jewish if they passed through there.” 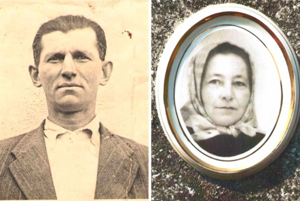 Seeking Jews and partisans, Germans visited the village for several times and ultimately burned all 38 houses there including Vargas’ house. Later, they built a new house in the same place. Götz remained with the family also after the burnout, until the end of the war.

“He [Götz] never told us where they were hiding or the name of the family,” Doron Levin, Götz's grandson, told The Slovak Spectator. “We were in Slovakia for heritage tour and found some pictures saying that Vargas family are the saviours. Now is the first time we met them.”

After the suppression of the Slovak National Uprising and the invasion of Slovakia by the Germans, the Hlinka guard and the German SS started the search for Jews in hiding. The entire Földeš family had to leave apartment they rented in village of Šalgočka, because the owner of the apartment was afraid and unwilling to hide them.

In total despair the family hid in one of the sheds of the manor where Földeš was working as a blacksmith. At first he ordered them to leave. When the little Judita saw the desperate faces of her parents, she turned to Jozef Krajčovič and begged him: “Sir, please spare us,” according to embassy’s press release.

He decided to save them; although he was aware of the life-threating danger to him and his entire family. After the war, Krajčovič said that it was the plea of their daughter Judita that touched his heart. One of his four daughters Mariška was at that time the same age as Judita

He then took them to his house where he hid them in the kitchen store - room. He bricked up the store-room apart from a small hole.

“There was only one hole hidden behind wardrobe,” Krajčovič’s daughter Elena who now goes by name Katrincová told The Slovak Spectator. “Our parents were giving them food or taking out what was needed to be taken out through it.”

The stayed there for eight months until the liberation in April 1945.

“When we came out of the hiding place, the bright sunlight, fresh air and the vast excitement overwhelmed us. My mother passed out,” the press release quotes Judita as saying.

From cave to goat hut

The Weiss family lived in Hodruša where the father Aaron Weiss owned several stores. The Weiss family managed to survive with their father's business intact until a relatively late stage of the war.

Later however they had to escape to a cave above the village. This was the entrance to a mine with beds and a stove. The mine was blocked so people could not get in.

“We arrived during autumn. During the winter water started to drip from the ceiling, and we got wet,” Ariel Weiss said, as quoted by Israeli Embassy.

The Kašša family then offered Weiss family a goat chalet where they took shelter for four months. This was a house consisting of one room for the goat shepherd.

“They were giving us food even it was life-threatening,” Gabriel Weiss told The Slovak Spectator. “When Germans learned that someone was hiding Jews his whole family was endangered.”

When the front came closer, the Weiss family went back to the mine. There, they found “a whole village” hiding inside the bunker. They stayed there one week until the Germans withdrew and the Red Army arrived. The Weiss family immigrated to Israel in 1949.

Living with an SS officer

Bratislav Handl and his wife Otília were honoured for rescuing Ladislav Laufer, his wife Irena, their daughter Esti and two other unknown family relatives.

During their escape from the Nazis, the Laufer family rented a small apartment in a building with several apartments, which was owned by the Handl family, who lived in one of the apartments with their two children, Zora (age 12) and Radko (age 16).

Other apartments in the same building were rented to a Slovak colonel, to a couple of elderly Jews, and later on to an SS officer.

When the intensive persecutions against Jews commenced again, and after the elderly couple were taken by the Germans, the Laufer family descended into a hiding place where they stayed with relatives.

Across from the apartment there were a few storage sheds. Next to the exterior wall stood another storage shed that was smaller and contained an underground basement, which was entered by climbing through a small opening in the shed's floor. This opening was used as the sole ventilation source for the basement.

“It was a dark place, with no air flow except the small opening,” reads the embassy’s press release. “Five people slept there in one bed.”

The Laufer family was hiding for nine months. During that period, Mr. Handl died died of cancer. Young Esti was occasionally allowed to spend time with the Handl's kids, and to play with the daughter Zora who was at the same age.

“Bratislav Handl even insisted that Esti and her mom would spend Christmas with them, introducing them as a family member, while an SS officer sat at the table and put Esti on his knees,” reads the embassy’s press release.

Augustín Lacika and his wife Valéria were honoured for rescuing Ján Bustin, a doctor.

When the Germans occupied Slovakia and the Jews’ situation was extremely precarious, Helena Smardová, whose husband was a patient of Bustin's, offered to hide the Bustin family in her house.

By December 1944 that was no longer safe and another patient Augustín Lacika and his wife Valéria - accepted Ján Bustin, his 18-year-old son.

“All family members were very nice and patient with me and they tried to make my life as easy as they could,” Ján Bustin said, in the embassy’s press release.

When there were no strangers in the house, Ján was allowed to move freely around the house like other family members. However, when the bell rang, he would run to the basement to hide.

On January 27,  all those ten brave Slovaks were officially recognized as ´Righteous Among the Nations` and their names will be engraved on the Wall of Honour in the Garden of the Righteous at Yad Vashem in Jerusalem.

“On behalf of those they rescued, their families and relatives and on behalf of the State of Israel, I would like to thank them,” Zvi Aviner Vapni in his speech. “Their names and deeds shall not be forgotten. As the prophet Isaiah said: 'I will give them an everlasting name, that shall not be cut off.'”