THE PLEA of a small girl reminded a blacksmith that his family was not so different. He walled up the pantry off the kitchen, leaving only a small hole for the exchange of food and waste, where a family lived for eight months in hiding. 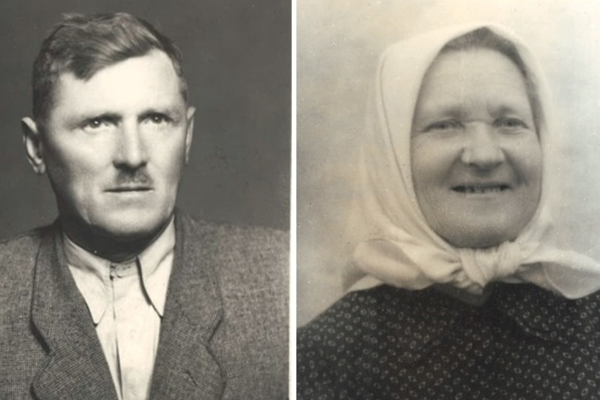 Jozef Krajčovič with his wife Anna are righteous among the nations. (Source: The Embassy of the State of Israel in Slovakia archive)
Font size:A-|A+

The Földeš family lived in Eastern Slovakia in Michalovce, raising  their only daughter Judita. The family was fortunate to avoid the 1942 deportations. In 1943, rumors of the resumption of the deportations started to spread again. As a result, Jucka’s parents, as they called Judita at home, sent her together with a smuggler to the city of Uzhhorod, then Carpathian Ruthenia, where her grandmother and other relatives lived. At that time the region belonged to Hungary. The life of Jews was difficult there but relatively safer in comparison with the situation in the surrounding countries, as no deportations had taken place there yet.

However, the Germans invaded Hungary in March 1944 and Carpathian Ruthenia came also under their government. The arrival of Adolf Eichmann to Budapest was a bad omen for the Jews. Jews from the Hungarian occupied parts of Southern and Eastern Slovakia and Carpathian Ruthenia who until then had lived so far in safety started to amass secretly to cross the border to Slovakia to escape deportations.

Judita also returned home to her parents. But as the Eastern Front approached, the Jews of Eastern Slovakia were forced, based on the law, to migrate to the western part of the country. There they were concentrated in absorption camps such as in Sereď or Nováky to await their deportation to the extermination camp of Auschwitz.

The Földeš family had no relatives or acquaintances in Western Slovakia. Just as thousands of other Slovak Jewish citizens they were brought to the absorption camp in Zemianské Sady, from where they decided to escape and hide, as many others. They accepted the offer of the “Jews coordinator”. In the village of Šalgočka they first lived in a rented apartment and Mr. Földeš worked as accountant at a manor for several months, until September 1944.

After the suppression of the Slovak National Uprising and the invasion of Slovakia by the Germans, the Hlinka guard and the German SS started the search for hiding Jews. The entire Földeš family had to leave the rented apartment, because the owner of the apartment was afraid and unwilling to hide them.  The sentence for keeping  Jews was very severe and most of the times ended up with the death of the one providing the hideout, as well as his entire family.

In total despair the family hid in one of the sheds of the manor where Mr. Földeš was working. By coincidence, they were discovered there by Jozef Krajčovič, who worked as a blacksmith at the manor. At first he ordered them to leave. When little Judita saw the desperate faces of her parents, she turned to Jozef Krajčovič and begged him: “Sir, please spare us.” He decided to save them, although he was aware of the life-threatening danger to him and his entire family.

After the war, Krajčovič told them that it was the plea of their daughter Judita that touched his heart. One of his four daughters Mariška was at that time the same age as Judita and he could depict himself in the same situation as the persecuted. As he mentioned later, he was horrified just from the thought of something similar happening to him and his family.

He then took them to his house where he hid them in the kitchen storeroom. He bricked up the storage room apart from a hole through which he was giving the Földeš family food or taking out the waste. Nobody in the village had any idea that a three person Jewish family was living in his house. “In this space”, tells Judita, “we stayed for eight months until the liberation in April 1945.”

During the entire time, apart from Mr. Földeš who climbed the ladder to the attic of the house secretly a few times under the cover of night to have a cigarette, Mrs. Földeš nor her daughter Judita ever left  this room out of fear. According to the younger daughter of the Krajčovičs, Mrs. Mária Bosá, two German soldiers of the retrieving German army stayed in a room above the storeroom for two days. Nobody from the hiding Földeš family dared to even breathe out aloud during this unwanted visit.

Judita recalls: “When we came out of the hiding place, the bright sunlight, fresh air and the vast excitement overwhelmed us. My mother passed out. We left the house of our rescuers and travelled to Michalovce, the city where we had lived before. A Soviet soldier had settled in our apartment. We waited several weeks until it was evicted and when we entered our home we started to establish ourselves under the conditions of freedom. We have never forgotten our rescuer and my mother was sending him food packages as an expression of gratitude for rescuing us, and bonbons, 70 a year until 1981.”

Both families remained in contact until the decease of the adult members of the family. Their daughter, Judita Horalová, born Földeš, and Mrs. Mária Bosá, born Krajčovič, have maintained a warm correspondence till today.