Fear of suffocating in a shed basement

AN SS officer sat a little girl on his lap at Christmas - but she was a Jew in hiding, posing as visiting family. 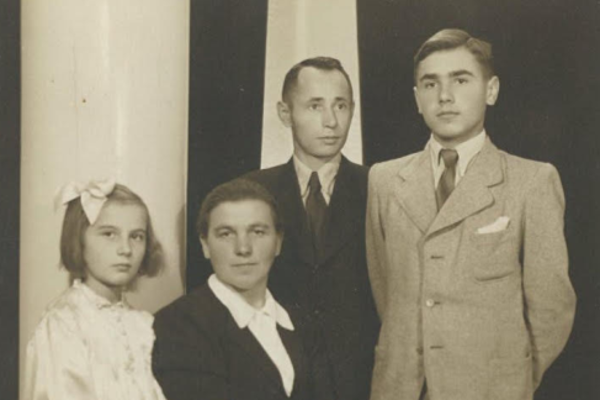 Bratislav Handl and his wife Otília are righteous among the nations. (Source: The Embassy of the State of Israel in Slovakia archive)
Font size:A-|A+3

Ladislav and Irena Laufer lived with their only daughter Esti in Nové Mesto nad Váhom. Ladislav was in the tree business and employed up to 40 employees. Irena was a housewife. Between the years 1942 - 1943, the family used to live in different places, in nearby villages and mountains. In 1942 they obtained  false documents with their real names (the Laufer surname was not identified as a typical Jewish name). For their livelihood, Ladislav worked as a manual labourer. In the public the family pretended to be Christians. They even celebrated the Christian holidays.

Esti, daughter of Ladislav and Irena, got ill while the family resided in Humenné. The parents were afraid Esti might suffer from tuberculosis disease and went to a sanatorium in the High Tatras. Although she didn´t suffer from tuberculosis, she stayed at the sanatorium until her father brought her back at the end of February in 1944. It was after the partisan revolt and the occupation of Slovakia by the Germans - and at the time when the persecutions and eradication of the Jews of Slovakia had renewed.

Esti joined her family that rented a small apartment in a building with several apartments, which was owned by the rescuers' family, the Handl couple, who lived in one of the apartments with their two children, Zora (age 12) and Radko (age 16). Other apartments at the same building, which was shaped in the U letter, were rented to a Slovak colonel, to a couple of elderly Jews, and later on to an SS officer.

Across the apartment there were a few storage sheds that served for storing materials and equipment, such as old steel equipment, light bulbs and anything that could be saved. At the far corner of that same side was a heating stove for drying fruit. Next to the farther wall stood another storage shed that was smaller and contained an underground basement, which could have been entered by climbing through a small opening in the shed floor. This opening was used as the sole ventilation source for the basement.

When the intensive persecutions against Jews commenced again, and after the elderly couple were taken by the Germans, the Laufer family - with the help of the rescuers' family - descended to the small underground basement of the shed, where a couple of family relatives from the mother's side also stayed. It was a dark place, with no air flow except the small opening. Five people slept there in one bed.

The Laufer family was in hiding for nine months. Their survival would not be possible without the extraordinary courage of the Handl family. At that time, Mr. Handl died from cancer that spread in his throat and lungs.

Young Esti was occasionally allowed to spend time with the rescuers' children, and to play with the daughter Zora who was at the same age. Mrs. Handl even insisted that Esti and her mom spend Christmas with them, introducing them as family members; an SS officer at the table sat Esti on his knees. Esti remembers well one incident when there was a search at the Handl family's house, and Mrs. Handl signaled that there was danger by only a glance, which led her to run to a nearby garden and wait at least two hours in snow, dressed only in light clothes, until the danger had passed.

Life in the bunker was accompanied by constant fear of exposure, of suffocation - when the bunker hatch had to be concealed due to security reasons, of the danger of the war around them, of bombings later by the allies. On a few occasions, the Handl family members heard the sound of the boots of the Slovak collaborators with the SS forces, who threatened the lives of everyone in an immediate way if they found  Jews. During this time, it was the Handl family who assisted in every possible way for the survival of the Jewish family.

After an intense fight between the German and the Soviet forces, the area was freed in April 1945 by the Soviet army, and the Laufer family was set free.

It was the father, Mr. Handl, who made the initial decision to save the Laufer family, fully knowing the possible ramifications to his family. The mother, who despite the grief and the shock caused by the loss of her husband, kept hiding the Laufer family, while endangering her life and the lives of her children.