INVENTORS of a device to administer breadrolls and unpacked bakery products in batches want to garner success also abroad. 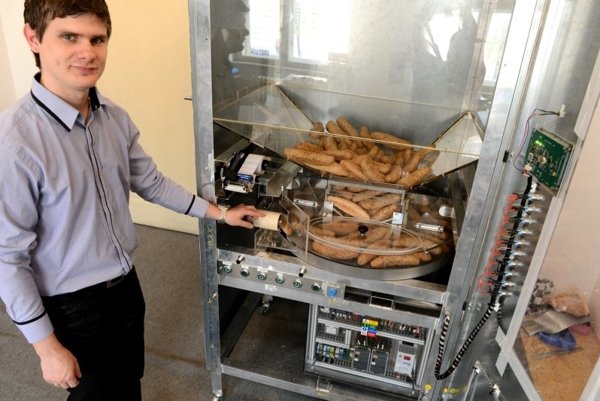 The breadroll machine, created in Košice, started operating in the beginning of September in a retail chain store in Košice-Šaca.

However, its owners withdrew it after several days, because of interest by a business from Russia.

“We did not expect to withdraw it that soon but a well-off interested businessman appeared from abroad,” Marek Vician of the Patent Pending company which holds the patent for this device in Slovakia and abroad, told the TASR newswire. “As we had only a single series machine, we had to react promptly and immediately to end the free-of-charge loan of this device.”

The company is also negotiating with other interested businesses about supplying the machines; while the price is influenced by the early stages of serial production. Negotiations with retailers interested in their invention are ongoing, Vician said in autumn, adding that a German retail chain was negotiating the tailor-made production of the device, while there was also an offer to sell the patent which they were evaluating.

The breadroll vending machine packs bakery products according to customer selection, functioning similarly to a vending machine. The consumer chooses a number and type of baked good, pushes the due button, and the machine dons the goods with a barcode for checkout.

“The main advantage of the device is that it prevents direct contact of the client with the bakery products before and during the process of sale,” Vician said.

Two Košičans, Vician and Ladislav Petráš have been developing the device for five years. The prototype was made in cooperation with the Technical University of Košice and it was first introduced to media in mid-2014. This system has no par around the world so far, Vician opined.