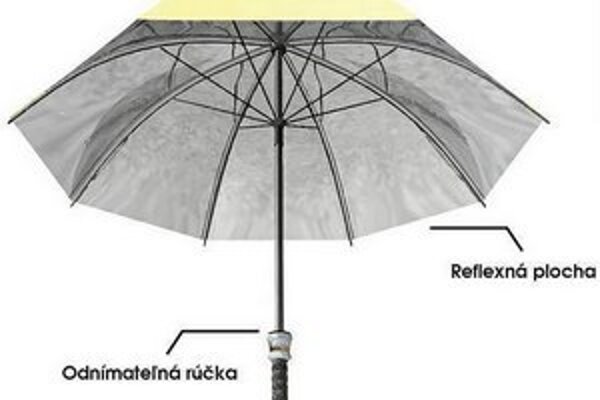 Šlosár, a postgraduate student at the Faculty of Mining, Ecology, Management and Geo-technologies of the Technical University in Košice (TUKE), focuses on alternative sources of energy and their practical use.  For example, he improved the solar cooker, shower, fridge, and fruit dryer that operate only on sun rays. He presented the production of these devices for public in collaboration with the environmental education centre Sosna. Key to the recent award was his patent for a re-charging umbrella, the so-called chargebrella. He has had this technology patented in several countries.

The device, which looks like ordinary umbrella, has a generator embedded in the hand-grip which generates electric power either from sunlight or a strong heat, e.g. a hearth or a small stove. Thus, it can also operate at night. The chargebrella exists in various sizes: from classical and parasol,to a symbolic size of a small parabola. It is especially handy for tourists and travellers, as it needs no battery and is thus very lightweight.

A mobile phone, camera, notebook or other device can be connected to the chargebrella and re-charged. The invention is in the research phase, with the aim of getting on the market in several months.

Šlosár was pleased to receive the award, as he had worked very hard, not even taking a holiday during his five years of study, and he invested a lot of his own money in the research. “Thus, it is a satisfaction to get the award, and a mental boost,” he told the Košický korzár local daily. He founded an eponymous start-up, and a non-profit organisation Energia na dosah / Energy within Reach which pursues the further development of alternative energy sources for the wider public.

The winner of the category Culture and Art is Viktor Feher, a graduate of the course of new media at the Faculty of Arts of TUKE and is a promoter of visual culture in Slovakia. His project of monumental paintings on buildings’ facades is the most original gallery project in public space in the region of Košice. He is also co-author of the idea of the street gallery Street Art Communication.

The project Outstanding Student Personality of Slovakia is organised by the Junior Chamber International – Slovakia, where the best graduate and post-graduate students are selected by experts from academia and universities.