They want to see legislative measures, not promises concerning how the next cabinet’s programme will be drafted. 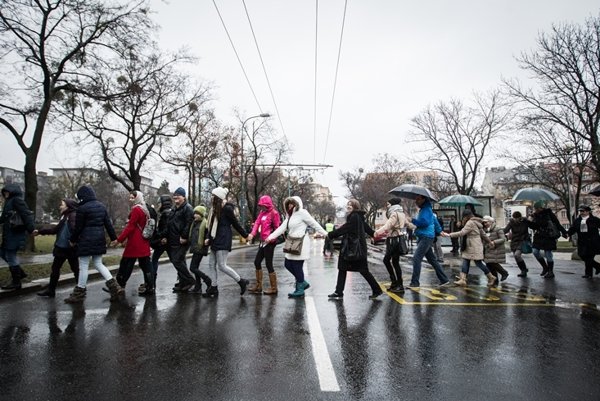 The teachers who have joined the ongoing strike under the umbrella of the Slovak Teachers’ Initiative (ISU), joined by supporters of their cause, formed human chains in a number of Slovak cities and towns including Bratislava and Košice on February 1. In Bratislava, the chain made up of some 2,000 people began outside the Government Office, went along the Presidential Palace, continuing on Štefánikova Street before coming full circle at the Government Office again.

“We’re fighting for there still to be teachers in 10 years’ time, for something to change in the education sector, for the sector to take a turn for quality and for pupils to benefit from a high quality education sector, which is vital for the well-being of our society and our entire future,” said ISU’s Vladimír Crmoman as quoted by the TASR newswire, adding that events like this are taking place in 14 cities and towns.

“This is a Slovakia-wide rally,” said Juraj Kolesár, the organiser of a similar event in Košice, which drew some 250 people – including parents of pupils and supporters from the general public. “We’re seeking to push our case not only to the community of teachers, but also to parents, in order to win this battle.”

He stopped short, however, of assessing the fact that the number of Košice-based teachers on strike has dwindled from 165 last week to 94 educators on strike on February 1. Four primary schools under the remit of the city’s authorities are involved in the strike as of February 1.

“It’s a mid-school year holiday today. We’ll know all figures on Tuesday,” said Kolesár, referring to the day off that Slovak students get after their progress reports are handed out. 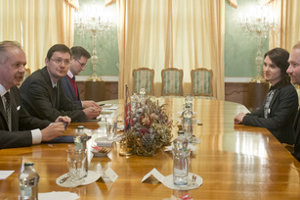 Nevertheless, he expressed his conviction that the strike will not fizzle out.

“Some sort of restart will occur, because voices are being heard from other regions and areas now, such as Prešov, Michalovce, Trebišov and even Spišská Nová Ves,” said Kolesár.

ISU has also evaluated the activities of the incumbent cabinet in the sphere of education, claiming that it has failed to meet 15 items from its four-year programme.

“Despite the fact that the whole 2012-2016 programme for education and the regional school system is written in a difficult-to-comprehend administrative style and features vague formulations, we managed to identify 15 items that haven’t been met,” said Branislav Kočan of ISU at a press briefing on February 1.

According to the teachers on strike, the government has failed to improve the standing of teachers in society, their financial remuneration or the preparation of future teachers for their jobs, for instance. The government was also criticised for failing to do away with bureaucracy and the administrative burden in education, to carry out a thorough revision of education reform or to come up with a new system of governing and financing regional education.

ISU maintains that even if the government’s programme had been formulated in a more specific fashion, it still wouldn’t have represented a binding document.

“Therefore, promises concerning how the next manifesto will be drafted in a more specific way aren’t enough for us,” said Kočan. “Even if it were drafted in a more concrete and precise manner, we’d still have no guarantees that those measures would really be put into practice.”