THE NURSES who have handed in mass resignations declared their willingness to reach a compromise in order to prevent further damage in the health-care sector. 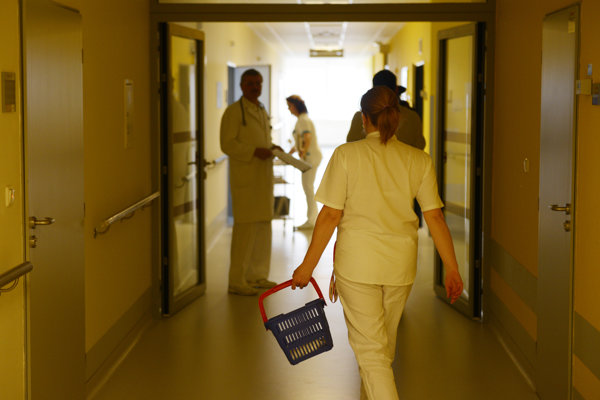 The nurses’ trade union continues to hope for “an agreement that will be attained after a constructive dialogue entailing the willingness of both camps to reach a compromise”, she continued.

“On behalf of Slovak patients, we’re awaiting a step forward from the Slovak government,” said Kavecká, as quoted by TASR.

Such a deal might only concern the approximately 600 nurses who have followed through with their resignations, while a different solution would apply to all other nurses, admitted head of the chamber of nurses and midwives (SKSaPA) Iveta Lazorová.

“We have yet to receive a concrete proposal from the nurses’ representatives,” Health Ministry spokesperson Peter Bubla said, as quoted by TASR. “Naturally, if that happens, we’ll be happy to learn more about it. At any rate, the door for talks at the Health Ministry remains open.”

Such a compromise proposal is now being forwarded to the nurses concerned, said Kavecká, who stopped short of saying when it might be tabled in preparation for talks with the ministry.

She was reluctant to discuss its terms with journalists, but admitted that the nurses are ready to settle for a lower salary rise than initially sought.

“Salaries aren’t the single most important thing here,” Kavecká added, as quoted by TASR. By contrast, the nurses stick to their requirement concerning a solution to address understaffed hospitals.

Lazorová said she is confident there is sufficient funding in the sector to accommodate their demands. Both organisations also noted that it's difficult to replace the nurses at the hospitals most affected by the mass resignation drive.

They also warned that more nurses and midwives – specifically 120 of them – are to leave their jobs, specifically at hospitals in Trenčín, as well as in Martin, Dolny Kubín and Trstená (all in Žilina Region).