THE TIME has come for teachers still on strike to return to their pupils and students, Prime Minister Robert Fico opined on February 3, as quoted by the TASR newswire. 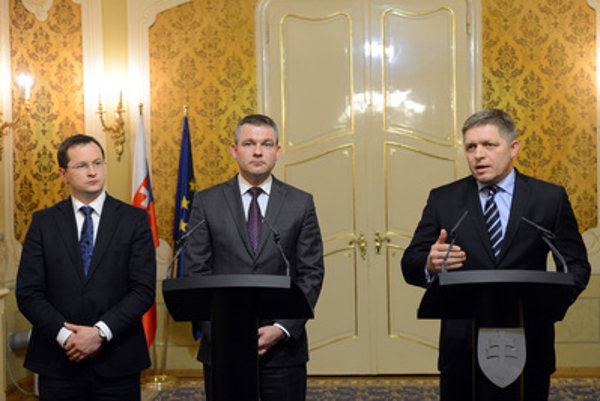 Fico expressed the final opinion of the government and parliament regarding the teachers' strike. “It’s time to resume classes and hold rational discussions as to what will be done after the parliamentary election,” he added. “There was a 19-day break during Christmas... ski trips are now under way, and a spring holiday is coming up. It’s no good leaving pupils without proper classes ... it may have an adverse effect on them,” the PM said.

He also made it clear that no decisions on the funding of the education sector and the salaries of teachers will be made prior to the general election on March 5. As for an extraordinary parliamentary session to take place before the March election, PM said, as quoted by the SITA newswire, that this would be unlikely to solve anything.

“After all that’s happened, it’s impossible to adopt decisions of a financial nature before March 5,” Fico insisted. On the other hand, he said he was ready to meet the teachers’ representatives and talk about issues such as the contents of the national education programme.

He went on to express his conviction that teachers have taken on board the fact that the incumbent government has increased the salaries of teachers by 22 percent in total between 2012 and 2016. “Nobody else in the state sector has seen their salaries increased by as much,” Fico claimed. “During Iveta Radičová’s government (2010-12), a fat zero emerged from negotiations. If we’re part of a coalition after the election, we’ll continue to increase the salaries of teachers. We have resources to raise their salaries by at least 25 percent during the next government's term.” A consensus must be achieved, though, via collective bargaining, as teachers are part of the public administration where about 350,000 people in total are employed.

Meanwhile, Fico gave thanks to the vast majority of teachers who have stuck to their timetables despite the strike, as well as those who eventually went back to their pupils and students. “Classes are now being held in up to 99 percent of schools. Of 6,700 schools in total, 47 were involved in the strike on Wednesday, which is less than one percent. At no point were more than two percent of schools involved,” prime minister summed up.

Vladimír Crmoman of the Initiative of Slovak teachers (ISU) said for SITA that premier downplayed the situation at the press conference, diverting attention from the government's unfulfilled promises and providing untrue data about the teachers’ strike. „Since January 25, more than 14,500 teachers from more than 950 schools have been on strike. More than 300,000 lessons have not been taught. More than 10,000 teachers, parents and students have been involved in a live chain in 14 Slovak cities,” Crmoman summed up.