Fico to teachers: There’ll be no talks

TEN days after thousands of teachers launched their strike for higher salaries Prime Minister Robert Fico insisted on February 3 that government will not make any decisions prior to the general election on March 5. 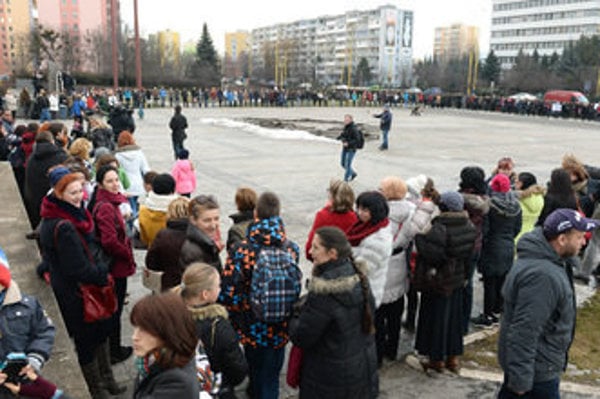 “After all that’s happened, it’s impossible to adopt decisions of a financial nature before March 5,” Fico told the press on February 3. “It’s time to resume classes and hold rational discussions as to what will be done after the parliamentary election.”

Fico pledged his readiness to meet the teachers’ representatives and talk about issues such as the contents of the national education programme.

The Slovak Teachers’ Initiative (ISU) launched a full-fledged strike on January 25. They fault the government for ignoring their demands in the long-term for a more adequate financing mechanism in the education system, according to Vladimír Crmoman of ISU.

In its response the ISU stated that Fico intentionally decreases the seriousness of the situation and refuses to acknowledge that his ruling Smer party is not fulfilling its promises. After teachers’ protest in 2012 the Fico’s cabinet accepted parliament’s resolution saying that government in December 2012 had to create report on the education sector and a list of measures on how to improve it.

“The government accepted the resolution including description of situation and proposal of systematic solutions but it has not dealt with them until this day,” Branislav Kočan of ISU said, as quoted by the TASR newswire on January 4. “Before we will discuss new conceptions, memorandums, national programmes we would welcome if government could do the homework it received in 2012.”

ISU’s requirements are the same as those that the Slovak Teachers Chamber (SKU) addressed to the government back in October 2015. The SKU demanded salary increases for all teaching and professional employees in regional education facilities of €140 per month this year and €90 per month at the beginning of 2017.

Teachers also demanded that the budgets of the Education, Science, Research and Sport Ministry and the Interior Ministry should be increased by €400 million in order to tackle current differences in school facilities in 2016.

Responding to teachers requests Fico has stated for several times that the incumbent government has increased the salaries of teachers by 22 percent in total between 2012-16.

“Nobody else in the state sector has seen their salaries increased by as much,” Fico told the press. “During Iveta Radičová’s government (2010-12), a fat zero emerged from negotiations.”

He went on that if Smer will be part of a coalition after the election, it will continue to increase the salaries of teachers. There are resources to raise their salaries by at least 25 percent during the next term, according to Fico.

The government lacks the will to accept teaches’ demands and ignores them, according to Jana Ftáčnik Pastorková of ISU.

“We see that those demands could be already realised; if ministry can find 20 million for continuing the controversial [education software] Knowledge Planet or for donations to universities which are losing their accreditation, money for our demands could be found,” Pastorková said, as quoted by TASR.

She referred to controversial subsidies granted by the Education Ministry to University of Central Europe in Skalica and The Danubius University in Sládkovičovo. The ministry admitted that it has supported private schools even though projects of state schools were of higher quality because it needed to allot the money quickly, by the end of 2015.

A total of 11,564 registered teachers in 746 schools joined the strike on the first day, according to the ISU website. However, many schools did not break or suspend classes and only about 300 schools closed.

Since January 25 the number of schools involved in the teachers’ strike has gradually decreased and ten days later just 47 schools were closed, out of the total of 6,274 schools in Slovakia, just 0.7 percent of the total, the Education Ministry stated on February 3.

The ISU responded that government is presenting the wrong numbers. Since January 25 more than 14,500 teachers in more than 950 schools participated in the strike resulting in around 300,000 classes which did not take place, according to ISU.

Dissatisfied teachers joined forces with around 600 nurses who are also on strike due to low salaries and made a joint call on February 3 for their situation to be dealt with at an extraordinary parliamentary session.

“It’s a joint struggle that connects us - the problems of both teachers and nurses have been ignored for a long time,” said Crmoman, as quoted by TASR.

The signatures of at least 30 legislators are required in order for such a special session to take place. Opposition parties - Christian Democratic Movement (KDH), Ordinary People and Independent Personalities (OĽaNO), Freedom and Solidarity (SaS) and Most-Híd - all confirmed their readiness to hold the session.

Represented by MP Miroslav Beblavý, who is listed as independent in parliament, politicians from the extra-parliamentary Sieť party also endorsed the session. Slovak Democratic and Christian Union (SDKÚ) also spoke in favour of such a session this past weekend.

An extraordinary session of parliament would not bring any results, only squabbling, according to Fico.

“It won’t be possible to make any decisions there,” Fico told the press. “It has been clearly said that financial decisions can’t be taken until March 5.”

It is however good what happened at the parliamentary committee for education taking place on February 2, where the committee members agreed on a call on all parties running in the March 5 election to declare a public commitment to approve a national education programme for 2016-20 with a time schedule and necessary financial provision, according to Fico.

Education, Science, Research and Sport Minister Juraj Draxler, Parliamentary Chairman Peter Pellegrini and the education committee chairman Mojmír Mamojka are willing to have a discussion with the teachers.

“They are available for discussion about what to do next, how it should look like when it comes to the national education programme, or the government’s programme statement,” said Fico, as quoted by TASR.

Meanwhile dozens of teachers gathered in front of Government Office in Bratislava on February 3 saying that they want to remind the cabinet of its job to do everything within its powers to make the Slovak education system better.

Carrying banners with the slogan “I am a teacher”, the teachers waited for ministers to arrive for a Cabinet session. It was a silent protest, partly to express the opinion that the government has been silent so far as well, according to Branislav Kočan from ISU.

“It’s also a message to Prime Minister Robert Fico that there is basically been no discussion about education in the past four years,” Kočan told TASR. “Politicians have kept a lid on all problems, and now there are consequences. The government is still quiet about resolving the current situation.”

Other protests and public meetings took place in several other towns and cities around the country.

Though the number of teachers who actively participate in the strike and thus lose a portion of their pay is falling, support of the public is gradually becoming stronger. A series of rallies have included parents and a petition supporting the teachers’ demands has collected more than 8,000 signatures, Sme daily wrote.

“I’ve been going to these protests since the strike was launched because I have two children of school age and I want them to learn in an adequate environment,” one of the parents participating on February 3 protest in Bratislava told TASR. “At the same time my heart is with the teachers and their demands for higher salaries.”

People have organised fund raisers to contribute to teachers’ salaries. Also more than 10,000 teachers, parents and students created live chains in 14 towns and cities around the country.

President Andrej Kiska has decided to support teachers together with nurses. He established a web portal verejnaobjednavka.sk (public demand), where he appeals on people to help him create an order for functioning health care and quality elementary schools.

The head of state says that he considers education and health care the most important areas that need improvement. It is right that Kiska entered the political campaign season in this way, according to political analyst Ján Baránek.

“We need an active president who will point to non-functioning things in the country,” Baránek told the Sme.