The school and teachers are strong archetypes which surface in our dreams even years after we left the classrooms. 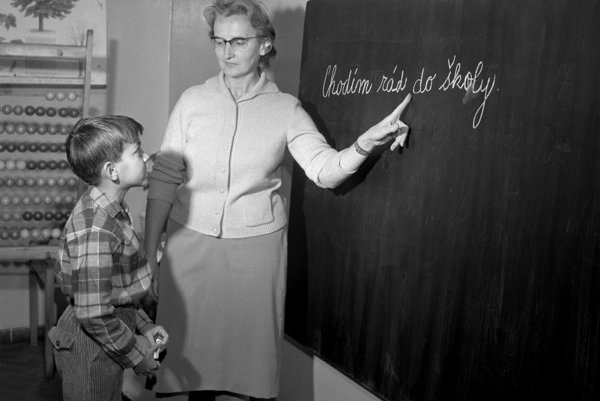 HARDLY anyone can remember the time when they learned to draw the curve of the letter B, or the right angle of an epsilon, but many would instantly recall who taught them to write. Many would not be able to list the alkali metals of Mendeleev’s periodic table or Pharaohs’ dynasties of Egypt, yet they remember easily witty comments of their class teacher which he or she repeated for generations of students like a chorus of a popular song.

We do not remember specific tasks from math that made us mentally bleed but we remember the anxiety and being sick from worry that the teacher may call us to the table on a day when we did not prepare for lessons. The school and teachers are strong archetypes which surface in our dreams even years after we left the classrooms. Sometimes as a sort of anxiety: we cannot recall the lesson and we fail at exams.

Most of our school memories are strongly connected to teachers. Whole generations of students pass through their hands. Sometimes they had already  taught the father or mother of their students. They are forming their students with everything they are: opinions, moods, or gestures.

Did they take you by the hand and lift you out of the grey mass?

It is important what hands you render your children to. There are days when the children spend more time with their teachers than with their own parents. If the teacher can find talent in a student and can draw them from an anonymous mass, than there is more hope that one day, the student will be happy in his or her future profession. If the teacher was able to convince even a single student that he or she is precious despite not winning the adolescent popularity charts at school, the teacher has done something substantial for the future of this country.

However, only a person of calling is capable of such fine sense. A frustrated foot soldier of the education system, who chases the end of month on a treadmill, juggling between two jobs to make ends meet will lose his sensitivity after some time. Thus, the society cannot be indifferent towards whether the best brains, people able to inspire opt for the teaching job or it remains for those who resorted to teaching only after they had exhausted all the other possibilities of their future existence. It makes a difference whether teachers are inspired and creative or whether there are burnt out after a few years at schools where political nominees who have already collected the last euro-crumbs from the table pull the strings.

Teachers from the last century

Ján taught Maths at a secondary school in a small town for more than 40 years. He wore a perfectly ironed blue coat and he was never on first-name, or too close, relations with students. He taught at a school where he had studied himself. His students could see in one of the yellowed old seniors’ photos hanging in the dark corridor of school how their professor looked when he was 19 years old.

Students never knew when they would be examined, as he drew the order from a small sachet with jettons. Someone was examined three times a week; and someone never. He rarely shouted and the cruellest words he said to a student were that he was looking at the blackboard as a cow stares at a new gate, meaning he looks silly. Dignity surrounded him as a sort of protective shield against students’ mockery, and despite his small stature, he never seemed petty.

On one winter day, when the class in which students did not change their shoes, looked like a muddy railway station waiting room, he told students they cannot learn in such dirt. He did not return before they had wiped the floor clean.

Alexander taught physics. He was coming close to retirement and was tired of teaching. He rode a bicycle to school which he put together from different parts. It was cheaper than to buy a new one. He was maintaining distance from his students, and he sometimes treated boys as if he was a commander of a battalion in which they were to serve. He had the impression that by the end of the 1980s, discipline was disappearing from the school and that without it, students will get lost in life; as he was getting lost in the new era that was invading schools through all holes. But he always used to teaching the curricula passionately, as if it was his last chance to pass something on to students.

Ladislav taught history before the Velvet Revolution that toppled communism. Even students who disliked him strived for his acknowledgement. His witty remarks were passed on between students as some kind of heritage and only those in the know laughed at them. There were lessons, like the victorious February revolution (which brought communists to power in 1948) that he skipped, and said only that maybe one day they will be able to read fuller and truer textbooks on this topic.

Teachers of the past had their hands tied: be it by the regime, by the tradition, or by conservativism. However, there were also those among them who are remembered by generations of students with everything they were; with their imperfections, generosity as well as pettiness, together with the silent pride of a teacher that they wore under blue coats.

We thought that after the Velvet Revolution, our schools will become seed beds for innovators, thinkers and future leaders for whom the school system will open doors which had remained closed for their parents. And we could catch up with the time that our country spent unfree under communism.

We hoped that schools would gradually change into places where children will learn in a new way so that they can pose the right questions; because our future will depend on the answers to these questions. We hoped that the time when children are doomed to mediocrity and get lost in the whole machinery like some less-important index in a chart will become the past.

But today, in the ocean of indexes, also teachers get lost – whom we expect to tap and draw the best from their students. We have created an environment where the hunt for various degrees has been elevated above the essence of school: to help the students understand what they excel in, and how they could best use their talents in life. We chained their hands with curricula and nailed down their teachers’ pride with low salaries.

Part of teachers do not teach currently

Currently, teachers in Slovakia are on strike so that society notices them. It is surely not just their salaries they are fighting for, but also for the importance society attributes to them. Their professional self-esteem is at stake. Schools must be healthy, self-confident places which both students and teachers visit proudly. Schools of the 21st century cannot be open-air museums, some kind of display cabinet of what has survived under the front of revolutionary changes from the times when students were guided not to stand out too much from the grey, compact mass.