President will not appoint constitutional judges before election

SLOVAK President Andrej Kiska will yet not appoint the candidates for judges of the Constitutional Court (CC). He confirmed this in his February 4 address to the CC at the Presidential Palace in Bratislava. 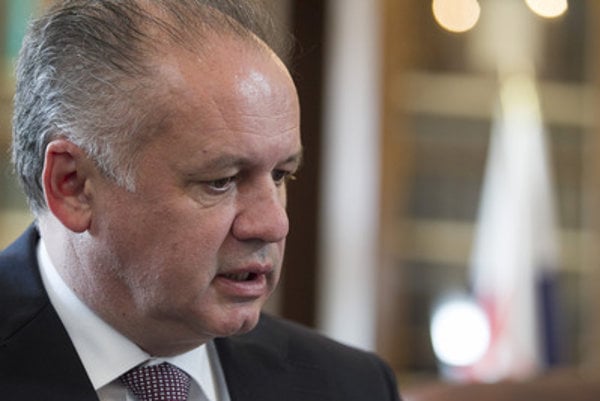 The President will discuss his next steps with the newly-elected representatives of the parliamentary political parties immediately after the March 5 election, the TASR newswire quoted him as saying.

“I want to say for my part that as an elected president, I will go to such talks after the parliamentary election with only two intentions,” he explained for TASR. “To increase the trust and authority of the Constitutional Court, its decision-making and every single judge who has the honour to work in this top court. And secondly, to prevent any disputes concerning competencies when appointing CC judges in the future,” he summed up. He stressed that as president, he is obliged to heed the legitimate operation of constitutional bodies, but as he has already exhausted all constitutional possibilities of how to execute this obligation, he would seek a solution for which he needs an agreement with the parliament.

Kiska said that he has already completed the documents concerning his decision on candidates for the judiciary Eva Fulcová, Juraj Sopoliga and Miroslav Ďuriš. In the case of the most recently elected candidates, Jana Laššáková and Mojmír Mamojka, some facts are still in the process of being checked.

The President again criticised the proceedings of the plenary session of the CC which by the end of 2015 refused to deal with his proposal as to how to interpret the powers of the president when appointing CC judges, citing the differences between the oral and the written arguments of the Third Panel of the CC regarding the complaint of candidates he had refused to appoint. The CC later ignored his request to expound the legal matter.

The Constituional Court is currently incomplete, as its 13-member plenum is missing two further judges. In 2014, Kiska did not appoint three CC judges out of six candidates proposed by the parliament. He only appointed Jana Baricová, arguing he could not discern true interest in the constitutional law in the remaining candidates although they fulfilled the legal requirements for the position. One more position will remain vacant from the end of February when the term of judge Ľubomír Dobrík expires; for this, two candidates of the ruling Smer party were proposed, Mojmír Mamojka and Jana Laššáková.

Vice-chair of the opposition Most-Híd party, former justice minister Lucia Žitňanská said, as quoted by TASR, that she understood the president’s decision and added that this only contributes to the non-transparent and chaotic situation which started when former Slovak president Ivan Gašparovič refused to appoint candidate Jozef Čentéš for prosecutor general. “It must be said that the chaotic situation was caused in the first place by the Constitutional Court with its decision, from which some judges have distanced themselves,” Žitňanská said, adding that she sees the solution in amending the Constitution.

Speaker of Parliament Peter Pellegrini has warned that the CC could become dysfunctional through this step, the SITA newswire wrote. Pellegrini added he can see no reason for such proceedings by President Kiska.