Free and €3 bank accounts part of the second social package. 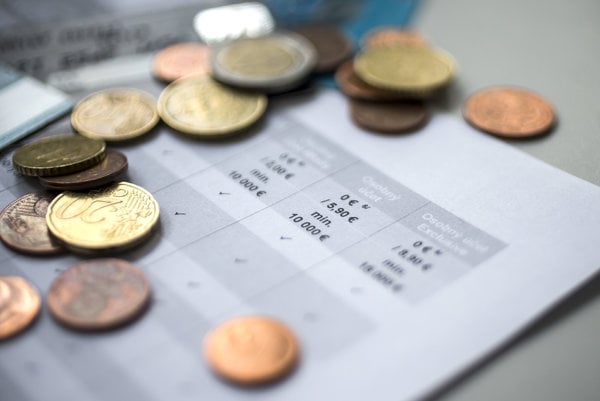 Bank clients can have accounts for no monthly fee. (Source: Sme)
Font size:A-|A+1

PRIME Minister Robert Fico’s cabinet has repeatedly tried to regulate banking fees. The latest attempt came in response to an EC directive aiming to make bank accounts cheaper, more transparent and accessible to all. But market watchers are sceptical that these new measures will draw big attention from the public.

“Banks are not thrilled with this initiative; I personally consider this to be a revolution in [bank] fees,” said Finance Minister Peter Kažimír at a press conference marking the launch of the so-called cheap bank accounts on February 2 as cited by the SITA newswire.

The EC directive aims to ensure that any consumer who does not have access to payment services can open and use a basic payment account at a reasonable charge.

The first one, while its official name is the basic banking product, is a free account for those earning less than €400 net monthly. Its holder, however, cannot hold any other bank account except a deposit account, a bank book or join a saving programme. It is enough if client makes a statement of honour that he or she is meeting these two conditions. The client will get an account, unlimited payment operations in the euro currency in Slovakia, the ability to make permanent payment orders and get an international debit bank card.

The second account is the payment account with basic functions, with fees that cannot exceed €3 per month. It is available for those with permanent residence in the EU but again its holder cannot hold any other bank account except a deposit account, a bank book or join a saving programme. The set of services that banks offer within this account differ.

“I firmly believe that this product will be interesting for our pensioners, but also students and low-income employees and will enable these people to lose their fear of banks and work with bank tools like anyone else does,” said Kažimír.

The legislation that governs the opening of such an account, an amendment to the law on payment services, took effect at the beginning of the year though banks had an extra month to prepare for the provision of the new account.

The Slovak Bank Association (SBA) believes that ordinary bank accounts are accessible enough. It bases its opinion on a survey by GfK Slovakia, according to which 86 percent of Slovaks aged between 15 and 79 years have an ordinary bank account. The most frequent reason for why the remaining 14 percent do not have it is they say it is unnecessary.

“The survey showed that ordinary accounts are affordable and did not uncover any fundamental obstacles preventing people from usage of ordinary accounts,” Ladislav Unčovský, executive director of SBA wrote in a press release. “Thus any legislative interferences into provision of the most used bank products are unjustified.”

Analysts of the Finančná Hitparáda website, which compares offers by banks, estimate that average monthly costs for holding ordinary accounts in Slovakia are between €4 and €5.

When customers meets some basic conditions, for example the amount of money held on the account, fees may decrease to zero.

“The basic banking product is good in order for a low-income person, who has not used banks’ services so far due to various reasons, to enter the banking world,” Pavel Škriniar of Finančná Hitparáda said of the new accounts created by the legislative changes. “It may happen that it would be not so advantageous for somebody because by switching to it he may lose benefits he used on the [so-far used] ordinary account.”

ČSOB specified that its products have already included operations that are included in the state-set packages and about half of its clients have not paid any fees for their account thanks to their activity or savings deposited with the bank.

“We do not have a problem to offer an account to people for a minimum price or zero euros because the intention of the European directive is to enable all people access to a basic bank account,” ČSOB spokeswoman Zuzana Eliášová told The Slovak Spectator. “But in Slovakia this directive is abused for utilitarian price regulation.”

Finančná Hitparáda also points out that a free account might not mean that the client would pay nothing as some bank services he or she uses are not part of the basic product.

Finančná Hitparáda points out that while the legislative accounts, as banks call these basic bank products, is an artificially created product while banks create products on the basis of surveys among their clients. It does not expect that banks would promote this product.

“It makes sense to offer only products that are profitable for a company,” Finančná Hitparáda wrote in its memo. “Banks have already said that this product will not be a profitable matter for them.”

Finančná Hitparáda also sees room for clients to pressure banks to change on their own.

“Slovaks like to grumble about prices in banks, but they do not want to use their mobility or change in behaviour to force them into a change,” Finančná Hitparáda wrote in its memo.

While these basic bank products are available also to foreigners, Škriniar does not expect any significant, if any, interest.

“The reason is the language barrier, the need to come to the bank and the need to sign the statement of honour,” Škriniar told The Slovak Spectator.

The basic banking product is available for foreigners from the EU as well as third countries, after meeting the conditions.

In terms of the payment account with basic functions, that is available for clients in the EU, and VÚB bank declined to assess the possible interest.

“This is a new type of a product, that has not been on our market in such a form so far, we do not dare to estimate behaviour of the market,” Katarína Vatrtová, the head of the department of the ordinary accounts and transactions at VÚB banka told The Slovak Spectator.

This is the third attempt of the cabinet to reduce bank fees for Slovaks. In 2010 the first Fico government introduced the so-called basic bank product and in 2013 it was replaced by the €1 basic bank package designed for Slovaks earning less than the minimum wage. None of the products have attracted significant attention from customers.