US chargé praises work of special regiment in Žilina

CHARGÉ d’Affaires of the US Embassy in Slovakia Liam Wasley paid a visit to the 5th regiment of special designation in Žilina on February 9. 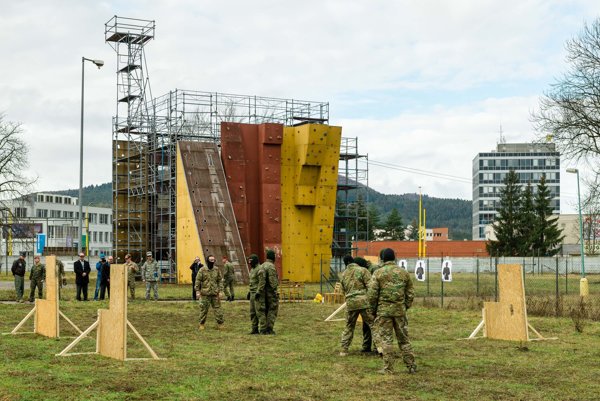 He thanked them for sacrifices they made during their work in Afghanistan.

“I would welcome any further involvement of Slovakia and the 5th regiment in providing training to Afghan security forces,” said Wasley, who got to know the regiment’s history, designation and main tasks, as quoted by the TASR newswire.

He also met with members of American special forces that are based in Slovakia and are engaged in joint military training with the 5th regiment.

“I consider this regiment to be one of the best units of the Slovak Armed Forces with respect to collective defence,” Wasley said, as quoted by TASR. “I’d like to thank Slovakia for its political and material support of the 5th regiment. I’d also like to emphasise that the 5th regiment’s warrant officer Martin Boháčik will become a commanding non-commissioned officer of the NATO High Readiness Forces.”

These joint activities with American special forces have been facilitated since 2011, added 5th regiment of special designation commander Ľubomír Šebo.

“Today we’ve seen an exercise of responding to ‘green-on-blue’ attacks [that is when an Afghan policeman or soldier fires on coalition forces in Afghanistan – ed. note],” Šebo said, as quoted by TASR. “There are seven members of American special forces and 24 members of the 5th regiment. It’s a sort of education in areas that both sides need.”

The Americans will train here for three weeks.

“This week takes place in Žilina, the next week they’ll participate in practical occupations in the Training Centre in Lešť (Banská Bystrica Region), while the last week will be focused on exercises in mountainous terrain,” Šebo concluded.