About 1,000 people were at a meeting on February 10, at 17:00 in SNP Square, aimed at showing their support for the striking teachers and to express dissatisfaction with the current state of the education system. 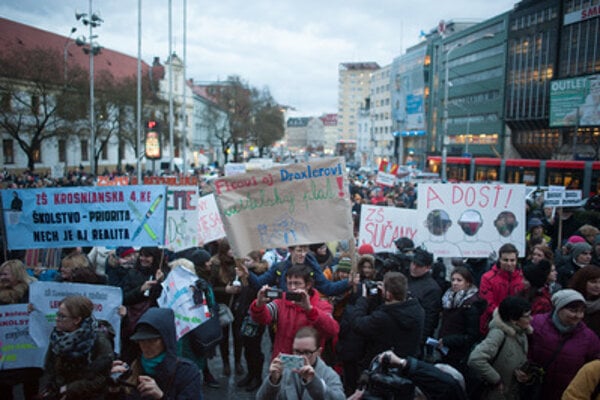 People carrying banners whose slogans included “Teachers, thank you”, “Je suis učiteľka (I am a teacher)” or “You started, we continue” came from several cities and towns, including Martin, Žilina, Sučany, Partizánske, Trenčín, and Košice, the SITA newswire wrote. Teachers were joined by both students and parents; most of whom claimed that they want the politicians and the state to make improvements to the education sector the highest priority.

Parents of pupils and students at the Combined School in Novohradská Street in Bratislava announced before the meeting that they support the teachers and will therefore not send their children to school each Friday following today's demonstration, until progressive and fruitful negotiations between the government and the Initiative of Slovak Teachers (ISU) are launched. They came to the stage and called on other parents to join the strike, in a similar way.

Representatives of the Initiative of University Teachers (IVU) appeared in the square, as well as on the stage, saying that if the government does not accept the ISU's requirements, they are ready to take over the relay baton from teachers and education staff, planning to launch a fully-fledged strike on Monday, February 15, when the summer semester starts at all universities. The strike committee of the ISU will suspend the strike at nursery, elementary and secondary schools and will continue in strike alert mode.

The ISU and the Slovak Chamber of Teachers (SKU) were happy about the participation at the meeting and said they were passing on their experience to the IVU strike committee.

The ISU and SKU requirements addressed to the government are the same: salary increases for all teaching and professional employees in regional education facilities of €140 per month this year and €90 per month at the beginning of 2017. Teachers have also demanded that the budgets of the Education, Science, Research and Sport Ministry and the Interior Ministry be increased by €400 million in order to tackle current differences in school facilities in 2016.

Prime Minister Robert Fico has stated several times that the incumbent government has increased the salaries of teachers by 22 percent in total between 2012-16, adding that if the ruling Smer party will be part of a coalition after the election, it will continue to increase the salaries of teachers. There are resources to raise their salaries by at least 25 percent during the next term, according to Fico.