THE EXTRAORIDNARY session of Slovak parliament on hot issues of education and the health-care sector could not be opened on the morning of February 11, as not enough MPs were present. 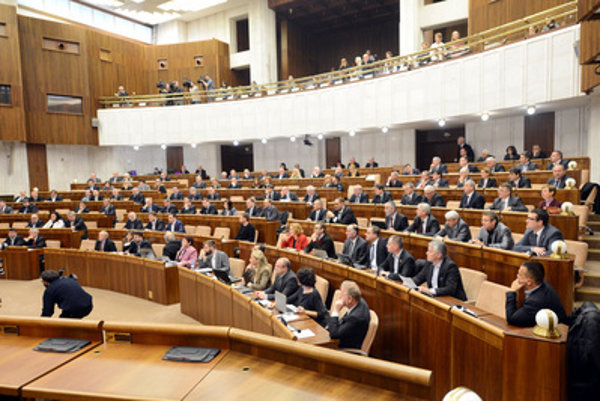 At the first check, only 67 MPs were present, and during the second check, 76 of them were in the parliament. However, for a session to take place, at least 76 MPs must be present, the TASR newswire wrote.

Although MPs of the ruling Smer were in plentiful in the auditorium, only 10 of them reported their presence. Of the opposition MPs who initiated the session it would be necessary for 57 of them to register, but one had already announced before the start she would not come; yet there were still more of them absent: ten during the first check, and five during the second.

“If this is your priority, you should be at your workplace,” Speaker of Parliament Peter Pellegrini sent a message to opposition MPs, stressing that for the third attempt, still only 10 Smer MPs would report their presence.

IN the meantime, an altercation took place also on the balcony reserved for the public: nurses and teachers came to attend the session which concerns their fate a lot, but they say they had been kept too long at the reception, and then they were told there is not enough space on the balcony for all of them. When it gets full, guards do not let any more people in. It was filled by pensioners instead. After vivid arguments, Pellegrini told teachers and nurses they could watch the course of events from the screening room.

In total, there are 67 opposition MPs (so only one of them can be missing for the extraordinary session to take place), and the proposal was signed by 35 of them (from Christian-Democratic Movement-KDH, Most-Híd, Freedom and Solidarity-SaS and Ordinary People and Independent Personalities-OĽaNO-NOVA), the SITA newswire wrote.However, even some MPs of these parties were missing during the first check (Ján Figeľ and Monika Gibalová of KDH; Daniel Lipšic of OĽaNO-NOVA caucus; Lucia Nicholsonová and Martin Poliačik - both SaS), as well as independent MPs Mária Ritomská, Štefan Kuffa, Daniel Krajcer, Miroslav Beblavý and OĽaNO’s Eva Horváthová – who excused herself in advance.

A third attempt to open the session was, finally, successful, starting at 10:55. It opened with a speech of Education Minister Juraj Draxler, the Sme daily wrote, adding that opposition MPs were dissatisfied with its contents – allegedly failing to address the most pressing issues.