Commercial investors lead the way as green building picks up 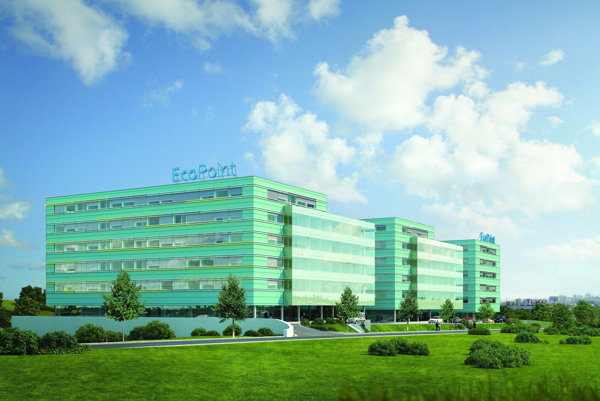 One example of a green building in Košice. (Source: Courtesy of SKGBC)
Font size:A-|A+

“New green spaces are becoming the norm in the office market and, with some delays, in the industrial real estate market too,” Ivan Brezovský, head of project management in commercial property adviser CBRE Slovakia, told The Slovak Spectator. “Given the great competition, the retail sector is forced to reduce operating costs and raise the quality of the indoor environment this way.”

Certification agents perceive these early years in the Slovak market as a learning process, where a majority of the clients are seeking the sustainability certification for the first time.

“Abroad the certification is not perceived as bureaucracy, but as a completely different approach to the process of the construction,” Marek Kremeň from the certification company Exergy Studios told The Slovak Spectator.

Office and commercial space remain the most common projects pursuing these certifications.

“Tenants are becoming more conscious and have the highest demands on the quality of their space,” Erika Farenzenová, project/event manager in the Slovak Green Building Council (SKGBC), told The Slovak Spectator. “On the other hand, for developers it is a huge added value when renting or selling the sustainability of certified spaces.”

Other certificates are issued for hotels and poly-functional buildings with the combination of administration and shopping space, says Ingrid Konrad, the chief architect at the Bratislava city council.

“We also have the first certified mono-functional building, the Decathlon store in the shopping zone Pharos,” Konrad told The Slovak Spectator.

The green building trend is also occuring outside Bratislava. Farenzenová recalled the most green building in Slovakia located in Košice, but Trenčín, Banská Bystrica and Trnava also have many sustainable buildings.

The residential sector continues to lag behind.

“But the residential construction Nové Slovany has the ambition to get the LEED certificate for individual buildings,” Konrad said.

At the end of 2014 there were 39 such sustainability certificates granted or registered, a year later there were 47. The number of certified buildings, however, is significantly lower, said Farenzenová.

Though there are lots of certification systems around the world, in Slovakia only two of them are used – the American Leadership in Energy and Environmental Design (LEED) and the British Building Research Establishment Environmental Assessment Methodology (BREEAM). Both are assessing permanent sustainability, low energy, choice of materials and internal environment quality, transport availability and ecology.

In terms of assessment, both allocate points or a percentage according to the extent in which they fulfill the requirements.

“You can get more points for construction in urban areas with accessibility to alternative ways of transport,” Farenzenová said.

Yet 21 buildings received or are receiving LEED certificates and 19 buildings BREEAM certificates in Bratislava with 27 certificates given in the Ružinov district, according to the chief architect statistics.

“Ružinov was awarded a plaque by SKGBC as the greenest district in Bratislava,” Konrad said.

Konrad said that sustainable construction is affected by the quality of the project and intelligent facility management which should be considered during the planning process.

“Figuratively it means the willingness to finance a higher volume in the pre-construction phase which usually returns many times over,” she added.

Brezovský notes that the decision to pursue such certification often depends on the length and duration of the construction investment.

“From the benefits of certification I pointed to more attractive space and lower operating costs,” Brezovský said. “And the drawbacks include higher investment costs and pressure on the quality of work.”

Kremeň is aware that the certification can be regarded as a purely bureaucratic exercise that raises costs and wastes time.

“However, if the certificate will bring a merchant, tenant or increase in the property price, we can talk about a disadvantage only theoretically,” Kremeň said.

Pressure on the sustainability

One of the priorities of SKGBC is to educate people about that green building means not only low energy demands, but is also about creating an economical and ecological space that is pleasant to look at.

“We are very pleased that the topic of green construction in professional circles is already known,” Farenzenová said. “Our next step is to target the public.”

Kremeň said that the average person spends more than 90 percent of their lifetime inside, which should be enough motivation to discuss the impact of buildings on the environment and health.

Konrad said that sustainable construction should be considered a long-term investment in the enhancement of the environment. Additionally, certification takes into account a projects context within the structure of the city – from the construction, through the connection to urban transport, cycling and electro-mobility support, reduced emissions and retention of rainfall, she said.

“As they say: we are not so rich to invest in cheap things,” she added.

The government should push for developing green building techniques. Farenzenová said they could already do so by merely implementing existing legislation.

“Functional quality control of certificates and an expertly led construction procedure could ensure compliance with the minimum requirements for the energy performance of new and rebuilt buildings,” Farenzenová said.

In a more advanced phase, both Brezovský and Farenzenová pointed to tax allowance for investors constructing more sustainably.

Cities and towns also have the opportunity to influence the sustainability of buildings via municipal plans, according to Farenzenová.

“They have tools to reduce the suburbanisation trend and vice-versa,” Farenzenová said.

Since 2013, Bratislava with another five European pilot cities are participating in the EU-GUGLE project which aims to improve the thermal protection of buildings with the reduction of the energy intensity in the overall scope of 226,000 square metres.

In its framework, Bratislava is restoring the floor area of the 20,000 square metres owned by municipality and another 20,000 square metres of privately owned property. The aim of the project also deals with other aspects of a sustainable environment, like the connection of buildings with public space, green areas and sustainable forms of mobility.

Konrad said that in the middle of the project period, the renewal of residential buildings is being carried out successfully, although with some problems.

“The project is accompanied by problems such as disconnection from the central supplier of heat in the creation of energetic self-sufficiency based on the alternative sources or fragmented property relations in residential homes,” Konrad said.

In addition to Bratislava, the project is underway in Vienna, Aachen, Milan, Sestao, Tampere and the associated towns of Gothenburg and Gaziantep. After five years and fulfillment of the project requirements, the European Commission plans to cover Bratislava’s costs up to €2 million.