The economic growth was the fastest since 2010. 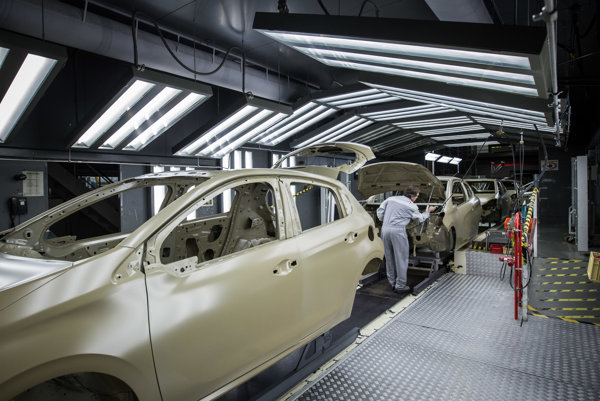 The Slovak economy is gaining momentum, driven in 2015 by domestic demand, while EU funds stimulated investments.

In the fourth quarter of 2015 the gross domestic product (GDP) at constant prices increased by 4.2 percent as compared to the same quarter of 2014, the Slovak Statistics Office announced within its GDP flash estimate on February 12. Compared with the third quarter of 2015, when it grew 3.7 percent, the growth accelerated by 0.5 percentage points. Overall in 2015 the GDP grew 3.6 percent, which is the fastest growth rate since 2010. In 2014 Slovakia’s economy grew 2.5 percent.

“The flash estimate for the fourth quarter of 2015 exceeded our original expectations of a more moderate growth as well as the consensus of the market at 3.9 percent,” Katarína Muchová, analyst at Slovenská Sporiteľňa, wrote in her memo.

Already earlier published data for the fourth quarter of 2015 indicated a sound growth dynamic of GDP. Muchová points to the positive development of industrial production, up 8 percent y/y, as well as the development of retail sales and the continued of improvement of the labour market. On the other hand, the development of foreign trade remained lukewarm.

The detailed structure of the GDP for the final quarter of 2015 will be published only in March, but analysts see especially domestic demand as the main driving force of economic growth when the consumption of households was supported by the improved labour market reporting falling unemployment and growing employment. Investments grew especially under the influence of EU funds.

“Slovakia needed to spend remaining EU funds allocated during the previous programming period 2007-2013 by the end of 2015,” wrote Muchová, “which significantly contributed to a dynamic pace of the growth of investments, especially public ones.”

Ľubomír Koršňák, analyst with the UniCredit Bank Czech Republic and Slovakia, estimates that apart from EU funds-driven sectors like construction, also other sectors experienced a revival during the final months of 2015.

“Especially the Slovak automotive industry, that became again the driving force of the Slovakia’s industry and exports, thrived,” Koršňák wrote in his memo. “In spite of VW’s diesel gate the Slovak car industry pushed its production to new historical peaks.”

Thus, according to Koršňák, it seems that even if the diesel gate has had an impact on the Slovak VW plant, other carmakers in Slovakia managed to fill the gap. Slovak carmakers benefited from strongly growing sales on the European market.

The real estate market reported a strong revival as well which reflected also in record growth in building construction.

“The released policy of the European Central Bank generously supports the real estate market – interest rates at historical lows in combination with growing wages are moving affordability of housing financed by a bank loan to new historical highs,” wrote Koršňák.

Germany’s economy grew 0.3 percent quarter-to-quarter during the final quarter of 2015, while the year-to-year growth was 2.1 percent. Overall the German economy grew 1.7 percent in 2015, recording moderate acceleration compared with 2014.

The 28 countries of the EU grew 0.3 percent in the fourth quarter of 2015 while the growth rate for the whole year was 1.8 percent, the statistics agency Eurostat announced on February 12. The euro area reported growth of 1.5 percent for the full year of 2015. In the last three months of the year, eurozone members grew 0.3 percent, compared with the previous three months.

Slovenská Sporiteľňa is leaving its forecast for Slovakia’s economic growth for 2016 at 3.5 percent and UniCredit Bank expects that the growth would decelerate towards 3 percent. The Slovak Finance Ministry estimates Slovakia's GDP growth rte at 3.2 percent for 2016 while last week it upgraded the forecast for 2015 to 3.6 percent.