AT ITS programme conference that took place a mere 21 days before the general election, the ruling Smer party promised an improvement in quality of life and again focused on the refugee crisis, which prevailed in public awareness the past few weeks despite problems in education and health care. 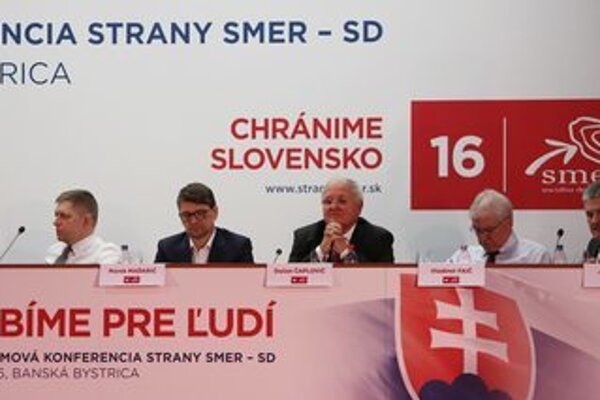 Political analyst Grigorij Mesežnikov considers the conference on February 13 an effort by Smer to stop the decline in election preference polls.

Prime Minister Robert Fico deemed the refugee crisis a risk if Smer was not included the next government.  The attitude towards refugees will also be critical in talks concerning a future ruling coalition, election campaign head (incumbent Culture Minister) Marek Maďarič said, as quoted by the Sme daily. Smer plans to create the government with one of the standard political parties - the ruling party considers opposition Christian-Democratic Movement (KDH) and Most-Híd; as well as its former coalition partner, the Slovak National Party (SNS) to meet this criterion.

Most-Híd leader Béla Bugár says it is not necessary to threaten voters with migrants when Slovakia has one of the toughest asylum systems and that it is not wise to weaken Slovakia’s position in the EU – hinting at the refugee quotas lawsuit against Brussels. Fico announced that if his party is in the next government they will not withdraw the lawsuit.

The PM also repeated the statement that compact communities are unwelcome but this time he did not single out Muslims. “We will not create any compact communities with a different religion,” he stated, without specifying what he meant by this. His previous statement about the need to prevent the forming of a compact Muslim community had been handled by the General Prosecutor’s Office, which turned down the accusation that those statements were of criminal content.

The prime minister promised voters, for example, an increase in minimum wage; the document lacks, however, specific proposals to solve problems in the education system, or nurses’ wages. Mesežnikov said, as quoted by Sme, that a complete election programme should include specific proposals, proceedings and solutions for all spheres – which Smer’s is missing.

The programme approved at the conference consists of four points, each of which is elaborated in several sentences. The party’s goals include increasing minimum wage to €500 monthly (by 2020), creating 100,000 new jobs, slashing the unemployment rate to under 10 percent, keeping stable prices and abolishing regional economic differences. As for education and health care, the party promises to fulfill its pledges, in agreement with representatives of school and nurses’ organisations. Among the biggest risks of electing opposition parties, Smer sees a government composed of several inhomogenous, disparate parties, and placing refugees in Slovakia.

The original political programme of Smer was published on January 12 on its website and included a mere five sentences, deemed general phrases by analysts. The conference in Banská Bystrica was meant to enhance the programme priorities. Smer held a programme conference in 2010 as well, but at the time it was two months until the election, rather than three weeks.