THE RELATIVELY small town in south-western Slovakia, Galanta, contains one great historical monument: a local manor house which, however, has been dilapidating for years. 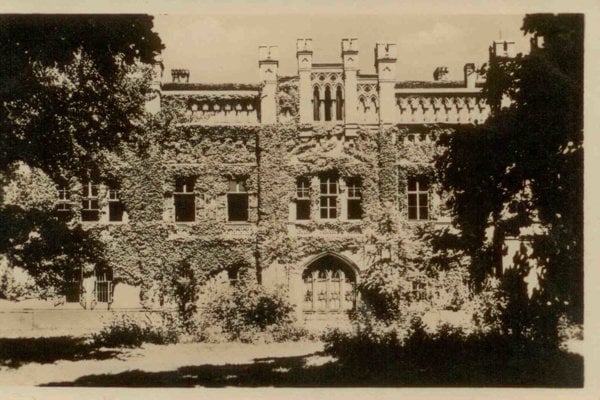 In 1633, it was built by the noble family Esterházy, and was also well fortified. Let us not forget that in the mid 17th century, only the Danube river divided the unconquered part of the Hungarian empire from the inscrutable Ottoman empire, and Galanta is only an arm’s length from this river.

Thus, the manor house was walled with a bricked wall and four corner towers. A deep moat was dug around the fortification which could be crossed only via a drawbridge.

When the Ottoman danger finally ceased, the castle got a more peaceful look too. The next member of the Esterházy family, Imrich, the Nitra Bishop, provided for the baroque reconstruction. The manor house underwent its last rebuilding in 1861, at a time when the nobility was losing its social position and started to look back nostalgically at its past glory. In this case, the nostalgia was reflected in the romantic style of the English gothic.

After World War I, nothing more was left to the aristocracy than memories, as they started losing their riches after the Czechoslovak Republic was established. The village office moved to the Galanta manor house, and after World War II, the communist-regime municipal office, called the ‘national committee’ moved there. Unlike other historical monuments which fell into disrepair during communism, this building got at least basic care.

The real disaster came after 1989 for this monument when it was left without an owner and started decaying. Currently, enthusiasts take care of it but this is not enough; it will require enormous resources for it to come anywhere close to its former splendour.

This postcard shows the manor house as it looked in the 1940s.