A stolen photo of a woman taken in New York has been used for calling on people to go to the ballot box in the upcoming election. 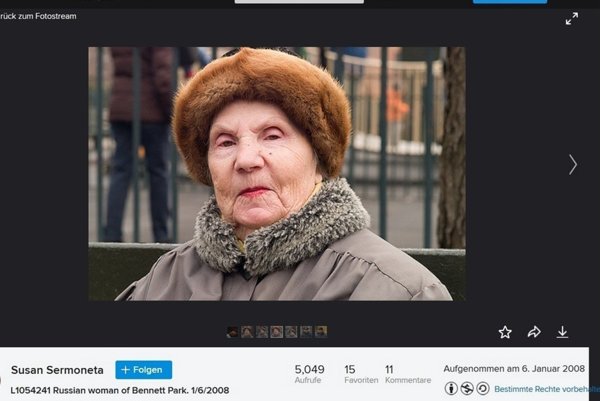 An anonymous online leaflet with a photo of an older lady and a question: Do you want Mrs Mária to decide about your future? calls for participation in March parliamentary elections.

With rigidly clenched lips and a slightly restrained look, Mrs Mária is not smiling in the photo. She is dressed fittingly for the season in a winter coat; and in a fur cap she looks determined. She will apparently go to cast her vote and ruin the future of young people.

This is the basic message of the pre-election online leaflet that started spreading over the internet during recent days.

The name of the woman in the picture in reality is not Mária and she will not vote in Slovakia, the Sme daily has found out. The senior woman sat at a bench in Bennett Park in New York. Photographer Susan Sermoneta took her picture at that place on January 6, 2008, and it was not the first time. Sermoneta lives nearby and the lady also visits the park quite often.

Sermoneta is passionate about taking pictures of people and what is happening in the streets. She posts her images on her website as well as at the photo portal Flickr.

She puts three conditions regarding licensing for her pictures: they cannot be used without her agreement, without putting her name with the image and for commercial reasons.

In this case somebody took this image and used it without her agreement and published it without the name of the author, cutting out the background with the playground.

Sermoneta has confirmed to Sme, by phone as well as by email, that nobody asked her for permission. Moreover, she is resolutely against using her photos for promoting any political stance without her agreement.

Neither the lady from New York nor her relatives would guess that somebody in Slovakia has abused her face to represent “the bigger evil” in Slovakia.

“The leaflet is trying to say that older women and older people in general are not apt to decide responsibly,” Janka Debrecéniová, lawyer from the human rights watchdog Citizen, Democracy, Accountability (ODZ) told Sme.