LEADERS of the Visegrad Group (V4) countries agreed on supporting the common European Union solutions to the migration crisis on February 15. 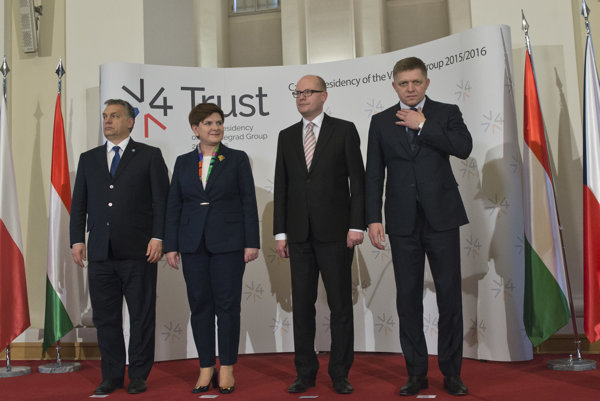 “It is a European problem and it cannot be solved otherwise than together,” Czech Prime Minister Bohuslav Sobotka said, as quoted by the Sme daily, after meeting his Slovak, Polish and Hungarian counterparts. “We support a realistic approach to solve the crisis.”

It is important to observe the action plan on keeping migrants and refugees agreed upon by the EU and Turkey, according to the politicians. They also stress the need for Greece to continue observing the Schengen rules, as reported by the SITA newswire.

Before the summit, the V4 politicians were criticised for undermining the policy of German Chancellor Angela Merkel. Luxembourg's Foreign Minister Jean Asselborn warned the V4 countries of not becoming the club of renegades. There is not a Visegrad or German solution to the migration crisis, but a European one, he stressed. Sobotka later supported his claims, Sme wrote.

Since the V4 leaders discussed also a backup plan, concerning the protection of Macedonian borders, in case Germany and Austria close their borders, the meeting was attended by representatives of Macedonia and Bulgaria. The leaders agreed on accelerating the deployment of European coastal and border guard, on supporting NATO activities and preventing the activities of smugglers, SITA wrote.

They also say that the situation may be improved if security forces and intelligence units cooperated more.

As for the backup plan, the Slovak PM rejected any accusations of lack of solidarity and stressed that the country has offered financial, technical and also personnel assistance. It is also necessary to have a plan B in case the protection of Greek-Turkish borders fails, as reported by SITA.

“I would be very glad if our Greek friends positively surprised us, but they will not,” Fico said, as quoted by SITA. “Conversely, they might surprise us with further economic problems which are currently discussed.”

He also stressed they want to have plan B prepared for the upcoming session of the EU Council to be held on February 18 and 19.