Global hunger is both a consequence and a cause of poverty. 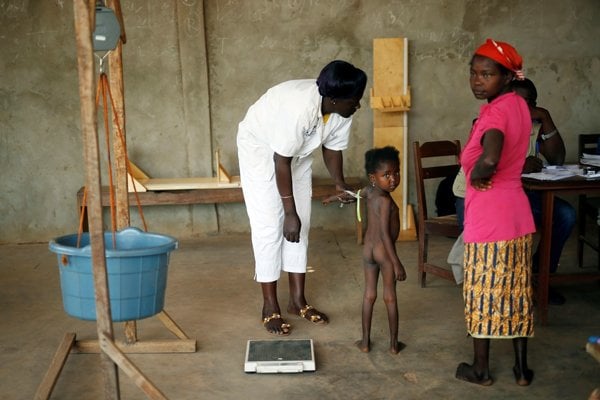 The year 2016 will see elections in many countries including Ireland, Slovakia and the United States of America. Discussions and debate around elections provide important opportunities for us, both individually and as a society, to reflect on our values, our aspirations and our hopes for our countries and for our world.

Global issues are increasingly recognised as fundamental to our future development. As inhabitants of a vulnerable planet and united by our shared humanity, we are becoming more conscious that the fate of all human beings is inexorably linked. Understandably much focus remains on the issues affecting our communities and countries and therefore it is easy to forget that Slovakia and Ireland are amongst the world’s most well developed countries ranked very high on the United Nations Human Development Index. In practice this means that a child born in either of our countries has a much greater chance of reaching its potential during its lifetime than a child born in a country ranked very low.

A key reason for this is hunger. The evidence is clear. Without good nutrition, of the pregnant mother and of the child up to two years of age, future intellectual and physical development is compromised. As well as a tragedy for countless individuals, this is undermining the economic development of poorer countries. We also know that inadequate nutrition is a key contributor to high maternal and child mortality rates in developing countries.

So how big is the problem? The experts in the United Nations tell us that 795 million people or one in nine people on the planet are hungry. The number is going down, even as the global population continues to increase, but it is not acceptable that over 90 million children under the age of five – one in seven children around the world – weigh less than they should.  Perhaps more startling, 161 million children are too short for their age, a key measurement showing that their initial nutrition was not good enough for them to fulfil their potential, physical or intellectual, and warning that they are far less likely to lead a full and healthy life.

Global hunger is both a consequence and a cause of poverty. If it is not prioritised, it will undermine progress to achieve global Sustainable Development Goals. The agenda resonates strongly with Irish people. Between the years of 1845 and 1850, one and a half million Irish people died and a further one and a half million emigrated due to a devastating famine. The Irish Government has placed the fight to end hunger and under-nutrition at the centre of our foreign policy. We have committed to double our expenditure on nutrition by 2020. Ireland continues to play a key role in influencing the international community to maintain the current focus on hunger and under-nutrition. Ireland has advocated strongly at EU and global level including in the UN development system to reinvigorate political dialogue to make nutrition central to development efforts with the objective of improving the nutrition status of the world’s poor and most vulnerable.

In Ireland’s partner countries in Africa, we work to increase coordination of action to improve nutrition and to ensure that international policies and programmes are responsive to local needs. The Irish Government encourages an approach that integrates nutrition within related sectors including agriculture, food security, health, gender, education, and social protection and supports a wide range of interventions designed to improve nutrition in the critical window of the first ‘1,000 days’ of pregnancy up to two years of age.

I have had the privilege to contribute to Ireland’s development programme when I was posted in Sierra Leone in West Africa. Seeing the impact of inadequate nutrition first hand reinforced my conviction that a major and sustained global effort must be maintained to eradicate hunger for good. Poverty and under-nutrition rarely exist in isolation. Environmental degradation, major weather related events due to climate change, population growth, rapid urbanisation, excessive food price volatility, the threat of pandemics such as Ebola and conflict are all examples of hazards which can disproportionately affect developing countries. Within these countries, it is the poorest who are most vulnerable.  Tackling this vulnerability requires concerted global effort in a range of areas.

In September 2015, heads of state and government from 193 countries worldwide formally adopted a universal agenda at the United Nations entitled: Transforming Our World: the 2030 Agenda for Sustainable Development. The result of several years of inclusive consultations and negotiations between UN Member States, civil society and engaged citizens globally, the final negotiations at the UN were co-facilitated by Ireland and Kenya.  Composed of 17 major Sustainable Development Goals focused on eradicating poverty and hunger, fighting inequality and tackling climate change, the 2030 Agenda for Sustainable Development is a charter for our planet and its people. Goal two is focused on ending hunger, achieving food security, improving nutrition and promoting sustainable agriculture.  Sustainable Development Goals will apply to both developed and developing countries and their implementation will contribute to global sustainable development, stability and security.

Whilst much remains to be done, to fulfil our aspirations for the future, we must continue to work towards a fairer world, one in which hunger and under-nutrition will have been consigned to the history books.