Visegrad verges on a new totalitarianism

Fico and Orbán have turned Havel’s and Walesa’s Visegrad into ruins. 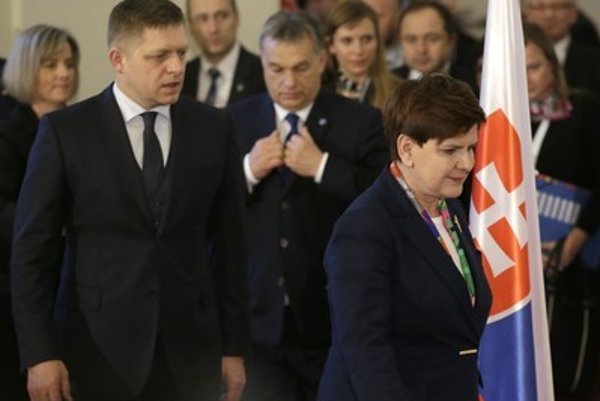 VISEGRAD is definitely one of the most beautiful places in Hungary. The mountains that roll up from the Danube shortly before Hungary falls into an endless flatland of the puszta, which reminded the roaming Hungarian tribes so much of the Asian steppe that they decided to stay.

Visegrad however is also an endlessly sad place. The ruins recall the greatness of Hungary once ruled by the French kings; the Hungarian Kingdom that used to be, thanks to the gold and silver mines in Slovakia and the fertile Danube lowlands, a jewel among the states in the Middle Ages.

A kingdom of which, after centuries of the Ottoman rule and decades of wars, almost nothing was left. At Visegrad, the biggest castle in the whole kingdom, we are invited to stretch our fantasy and imagine how big and advanced the civilisation was that almost ceased to exist here.

Visegrad as we had known it in early 1990s was a great project of great times. It laid the basis of something unprecedented in this part of Europe: the cooperation of the central-European nations affected by nearly a half-century of totalitarianism and various forms of Soviet occupation that turned independent states into the vassal territories of the Kremlin.

When Soviet rule fell, there was a threat that Central Europe could go back to the interwar times, when the lack of cooperation and often even hostility among Poles, Hungarians, Czechs, and Slovakia, made Central Europe an easy prey first for the Nazi Third Reich and then for the “liberators”, Stalin’s Soviet Union.

Founding the Visegrad Group — where the founding document carries the signatures of the Hungarian PM Jozsef Antall, Czechoslovak President Václav Havel, and Polish President Lech Walesa — laid the grounds for treating each other as partners rather than rivals. Visegrad has become part of the renewed Czech-Slovak partnership when after the rule of Vladimír Mečiar the entire grouping helped Slovakia to catch up on the lost years and make it to the EU and the NATO.

After entering the EU we still lived with the illusion that Visegrad could help western Europe to make the EU more immune from the return of totalitarianism in new forms, like those deployed by Putin’s Russia or the communist-capitalist rulers in China.

It seemed that the ethos of the people who had the first hand-experience with jailing and decades of oppression, would help motivate western Europe to defend human rights in the world. There was hope it would make EU countries less willing to pursue business relations with Beijing, Moscow and other dictatorships while ignoring the violation of fundamental human rights, that it would give Europe the power and the determination to defend its own fundamental values.

But when we look at Central Europe now, we must smile ironically about this original Visegrad ideal. In its current form, as seen also from Monday’s talks in Prague, the Visegrad Group is a distorted caricature of its original self.

States like Poland, Hungary, and partly Fico’s Slovakia, not only aren’t the guardians of the protection of democratic freedoms and ideals of the anti-totalitarian revolutions, but quite the contrary, they violate and limit the fundamentals of a functioning democratic regime.

Perhaps the liberal democracy that their predecessors were trying to build here wasn’t perfect and couldn’t introduce everything that has worked in the western Europe, the United States, and other democratic countries of the world.

But what Orbán brought about and what Kaczyński is trying to endorse and what Fico will do if wins the elections, is not a better democracy, but a new form of undemocratic regime. It’s not an improvement of democracy, it is its dismantling.

Visegrad and the central-European cooperation today work as an excuse for why this part of Europe shouldn’t be the West with all its democratic rules that need to be observed, with all the constitutional brakes that should prevent one party from dominating based on nationalist ideologies.

These ideologies are trying to suggest to central-European nations that if we do not follow the West, we will be better off. And the more proof comes to demonstarte that we aren’t and we are not likely to be better off under Orbán, Kaczyński, and Fico, the more necessary it is to tighten the screws of the new oppression — by invoking the fear of refugees and migration, of the dominance of Brussels, by suggesting fears of Germany or by demonising the United States. And by pulling Central Europe away from the core of the European Union.

There is only one aim of that: for the local rulers who have confused their one time election with a life-long mandate to be able to do whatever they want with the citizens of their Central Europe. And nobody from Brussels, Berlin, or Washington, will interfere.

Voting is enough for now

The Visegrad that we live in today has no added value for Europe, but is rather a toxic body that might dissolve the European Union and the NATO through the gradual corrosion of the fundamental values that these communities stand on.

In order for that not to happen, those Poles, Czechs, Slovaks, and Hungarians who do not want to live in a new form of totalitarianism must use the rest of the freedom they’ve got to revolt against the direction Central Europe is heading.

As seen from Monday’s summit in Prague, that Visegrad looks to be in ruins now, just like of that mighty castle above the Danube.

Written for the Sme daily by Luboš Palata, reporter of the Czech daily MF Dnes