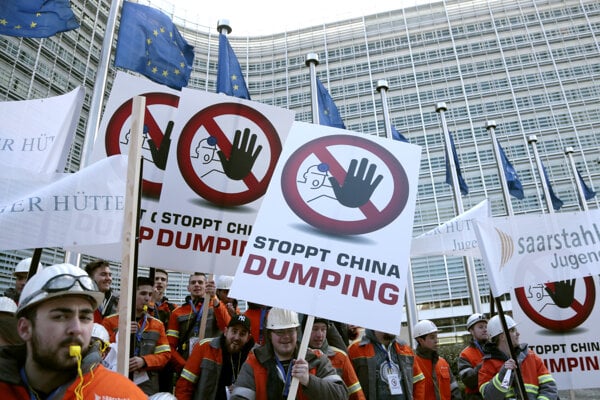 “We went to Brussels to express loudly the trade issues that have hurt European industry and its future,” USSK President Scott Buckiso told The Slovak Spectator. “Our message for the European Commission was clear: we have to stop the flood of products from China and other countries unfairly sold in Europe at dumping prices.”

European steel workers accuse China of using what they see as unfair export subsidies and selling products below their production cost. This poses a threat to steel industry-related jobs within the EU, they say.

The march was held to reinforce calls to put a swift end to dumping, to modernise Trade Defence Instruments, and to prevent China from obtaining Market Economy Status prematurely, Eurofer wrote on their website. 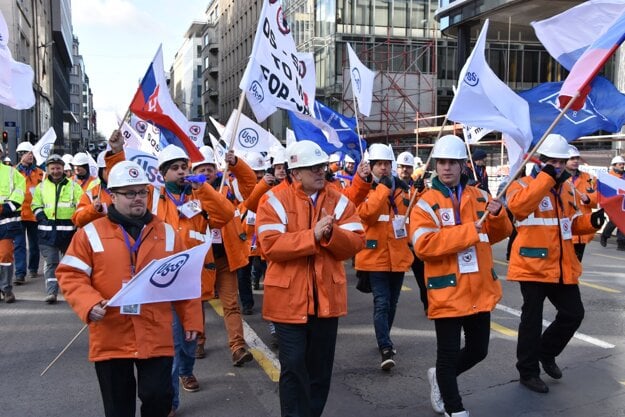 “We said yes to jobs and fair trade, but also said no to Market Economy Status for China,” said Buckiso. “We strongly oppose and expect the EC to deny MES for China as it does not meet market economy criteria.”

Countries around the world, including the United States, have launched actions to stem the flow of what they see as unfairly subsidised steel products from China.

“U.S. Steel Košice also participated in the Commission’s antidumping investigations into imports and we expect the EU to take an uncompromising stance in using all of the tools at its disposal,” said Buckiso.

Earlier in February the EC imposed provisional anti-dumping duties on cold-rolled flat steel products from China and Russia, but Eurofer perceives the import duties for China as too low to stop the flood of Chinese imports. The EC has also opened several additional investigations into cheap imports of steel products from non-EU countries.

Another strong appeal for the EC concerned EU Emission Trading Scheme proposal post 2020 which places a huge competitive disadvantage for European steelmakers, as it creates a huge cost burden even for the most efficient steel plants in Europe, according to Buckiso.

“On the other hand, dumped products from China have about 50 percent higher environmental footprint than products in the EU,” said Buckiso. “Too ambitious EU climate policy should not be a threat for the competiveness of the steel sector.”

The USSK is calling for a global level playing field.

“The European Union is one of the most open markets in the world and we strongly believe that European manufacturers, including USSK can compete with anyone as long as the playing field is level,” Buckiso said.

Amid high volumes of products imported to Europe during recent months, USSK has shortened the working week to four days while those employees staying at home received 60 percent of the average wage in January.

In late December, Mikuláš Hintoš, the head of the trade unions at USSK, compared the ituation in USSK to the crisis in 2009 when the steelmaker shortened the working week by one day for six months. During final months of 2015 the usage of USSK production capacities decreased from average 90 percent during the first nine months of 2015, to about 70 percent, according to the Denník N daily.

China produces 800 million tonnes of steel annually, what is almost half of the world’s total, with much of that exported. On average, Chinese steel is $50 cheaper per tonne than what is produced in the West.

Back in 2013, the USSK signed a memorandum with the Slovak government, in which it promised to remain in Košice and maintain its employment levels until 2018, while the government promised to help cut the firm’s energy and environmental bills.

In efforts to reduce costs the steelmaker launched this January a voluntary programme for early retirement as of the beginning of March, offering a severance pay of a 10-fold of the wage or €19,000 as estimated by the Hospodárske Noviny economic daily. Trade unions estimated that up to 100 workers may opt for early retirement.

USSK employs directly and indirectly more than 12,000 employees and is the biggest private employer in eastern Slovakia.