Instead of standing up in the parliament and addressing the protesting teachers, Fico sent other soldiers to fight his fight. 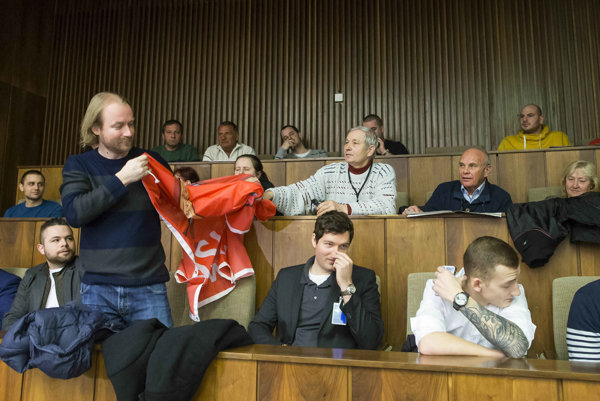 A PARODY of democracy is not a rare occurrence in the plenum of the Slovak parliament. Recently, however, one of the genre’s most exquisite pieces was staged for an audience other than politicians. There was even romance to the scene too, as it took place on a balcony and the protagonists showed a fervent devotion to their cause.

Those protagonists were several elderly men and women as well as others with an apparent preference for the ruling Smer party, who filled the seats of the balcony and prevented protesting teachers and nurses from attending the extraordinary parliamentary session convened on February 11 to discuss the ailing health care and education sectors in the light of the recent protests. At the start of the parliamentary debate (which eventually lasted until the small hours of the next morning but produced no substantial result), there was much more passion on the balcony than among MPs. The pensioners ripped down the banners rolled out by the few lucky teachers who made it to the balcony, ugly words, combined with twisted nostalgia for the pre-1989 times.

Instead of standing up in the parliament and addressing the protesting teachers, Fico sent other soldiers to fight his fight. Young men who covered their faces when the cameras of nosy reporters approached, and most of all, the elderly ladies, burning with rightful anger, who looked ready to defend their political hero no matter what.

The campaign has not reached its peak yet, and the final get-out-the-vote efforts are yet to come. But the past two weeks have shown that Smer is getting nervous and it has begun mobilising its forces.

The prime minister brought up a fraud allegation against the leader of the opposition OĽaNO, and has repeatedly tried to remind the people of the refugee agenda, even suggesting he is being scorned by Germany for his anti-refugee opinions.

Just three weeks before the election, the ruling party suddenly convened a conference to approve its election programme. We will never know whether the conference would have taken place even if Smer’s preferences stayed where they were a few months ago – that is, closer to 40 than to 30 percent. Perhaps Smer would be satisfied with its five general priorities, social packages, and tales about good sovereigns who protect their subjects from the evil that lurks beyond the border.

That thought is even more disturbing than the phantoms of Mečiar’s ‘babky demokratky’ on the parliamentary balcony. The thought that the strongest party in the country, absolute favourite to win the election victory and the most likely to decide the next government, does not even find it important to formulate a concrete programme in advance and present it to voters.

Then again, why would they? Their voters seem to be satisfied by emotion, with the awareness that there is someone to deliver them from evil, with a lousy joke jovially uttered to a crowd of thousands at a women’s day celebration, with an arrogant smile that dismisses a report on the state’s human rights record, with a 10 euro cheque from the Economy Ministry.