In Western Europe and the United States, it is increasingly fashionable to criticise the Visegrad countries for deviating from norms of liberal democracy. 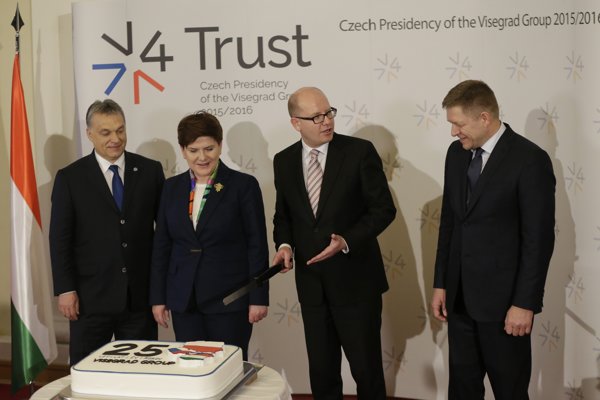 Prime Ministers of Hungary Viktor Orban, Poland Beata Szydlo, Czech Republic Bohuslav Sobotka and Slovakia Robert Fico, from left, are about to cut a cake to celebrate the 25th anniversary of the establishment of the Visegrad group prior to a Summit of the V4 Prime Ministers with the Prime Minister of Bulgaria and the President of Macedonia in Prague on February 15. (Source: AP/SITA)
Font size:A-|A+

Last week’s edition of Prospect magazine, an influential centrist intellectual magazine in the UK is but the latest example. The cover reads: “The new nationalism: Eastern Europe turns right”. It depicts the flags of the Visegrad countries, all of which are in Central Europe and two of which have left-leaning governments – but never mind such silly details. The story is co-written by a London-based Russian affairs specialist and a scholar who focuses on European far right movements.

The only explanation for this sudden shift toward Visegrad bashing is the change in governments in Poland. In fact, before the October 2015 elections in Poland, nobody paid much attention to the region and Poland was a favourite in western capitals. The June 28, 2014 edition of The Economist declared this “Poland’s second golden age,” though it was apparently a short one.

In the other three V4 countries, the governments are exactly the same as they were in 2014, but if one were to believe the headlines they have somehow suddenly become worse.

Most amazing about this wave of criticism targeting Central Europe is that it takes place almost entirely out of context of other global events, as if the V4 countries were operating in a vacuum. The response by Central European governments to the refugee crisis has been deplorable – and the language coming from Robert Fico and others is cynical, sickening and self-serving – but it is obvious now that most of the continent has scarcely done any better.

Speaking at an event commemorating the V4’s 25th anniversary in Prague last week, Pavol Demeš, the former Slovak foreign minister rightly asked: “Should we learn from Denmark about how to react to the migrant crisis?”

The Danish government is of course confiscating the property of all asylum seekers that arrive there. Austria has introduced a cap on how many migrants it can take each day and just a few hundred of the hundred of thousands of migrants that were meant to be resettled under the EU quota plan have been relocated. Quite simply European leaders make promises that they don’t keep.

All this took place as last week’s EU summit focused on finding a palatable way to allow the UK to limit migration and benefits for migrants – including ones with jobs that come from within the EU. That distraction means that there will need to be another “special summit” in March to make new policies targeting the migration crisis, because the old ones were never implemented. Oh yes, and don’t forget Donald Trump’s rise in the United States, Marine Le Pen in France and the Alternative for Deutschland party in Germany – sounds like a dangerous rightward shift to me.

No doubt there are plenty of reasons to criticise the current V4 governments, but it would mean a whole lot more if they were informed criticisms.