THIS postcard from the 1920s features the village of Hájniky from central Slovakia. As the Slovak name hints – háj means wood – in the past, rulers’ forest guardians used to live here. 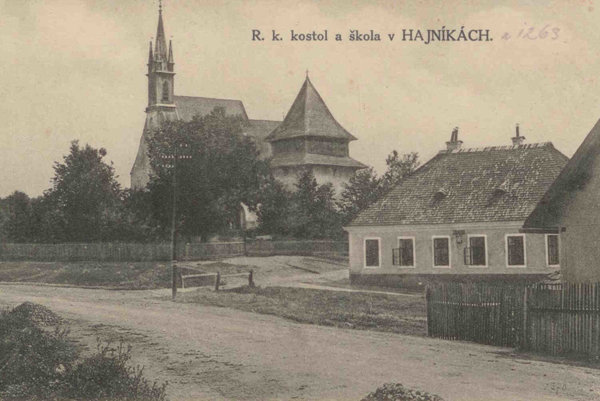 The village lies close to the town of Zvolen, with an important mediaeval castle from which Hungarian kings and their guests started their hunts in the vast royal forests.

The remarkable early gothic church of St. Nicholas dates back to this era of glorious hunts. Originally, it was surrounded by a deep moat and a protective wall. In small municipalities, the churches were places in which people from the wider neighbourhood found refuge from an enemy; in Hájniky, most frequently during the Ottoman wars. During that troubled time, this construction was seriously damaged.

In 1804, a belltower was added to the church from which one of the heaviest bells in Slovakia – Mikuláš (Nicholas) hangs. It was forged in 1512, and its weight, 5.1 tonnes, is truly impressive. Thanks to its weight, Mikuláš escaped the sad fate of many bells. During the Ottoman wars, but also during World War I, many bells were melted down to make ammunition. However, it was impossible to lower the bell from the Hájniky belltower, due to its weight.

Fans of old art can enjoy Hájniky, as a local temple has preserved its marked mediaeval style. It is slightly lower now, though, than in this postcard, as the pointed church tower did not stand a strong gale in 1928 and collapsed.

In 1959, Hájniky merged with the village of Rybáre and were attached to the spa town of Sliač.