HISTORY-seeking visitors to the Slovak capital were disappointed until recently, as such exhibitions had been lacking. 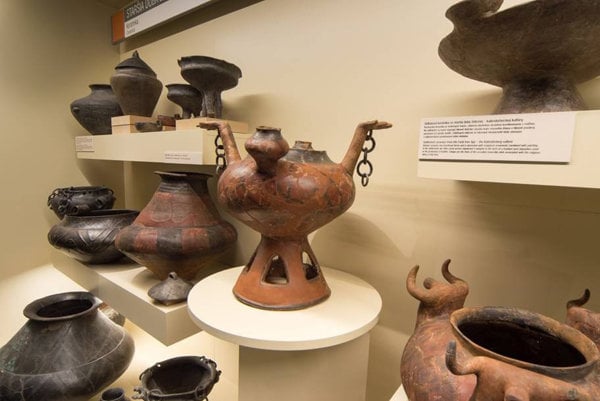 However, in mid-February, the first part of History of Slovakia was unveiled at the Bratislava Castle, covering the earliest periods of the territory’s history up to the times of Great Morava (9th-10th centuries).

The (at least partially) permanent exhibition comprises about 1,500 exhibits on 600 to 700 square metres. Most of them are items found on Slovak territory, be it originals or replicas, but there are also models and visualisations of buildings, some of which have not been preserved – or just minor parts, not offering a complex image.

From the earliest prehistoric times, from about half a million years ago – when the first evidence of ancestors of Homo Sapiens was found here – to the first appearance of farmers, the late Stone Age, Bronze Age, through Celtic settlement, Roman times, the turbulent migration period when several tribes arrived here, some of them to remain, and the settlement of Slavs, to the Great-Moravian times. The presentation includes tools, dishes, cult and religious items, jewels (notably, with militant Pannonian Avars mostly men decorated themselves), but also weapons, bones and means of payment.

Two museum directors falling under the Slovak National Museum, the Historical Museum (residing at the castle) Branislav Panis, and of the Archaeological Museum, Juraj Bartík, explained the exhibition for media, saying it can aptly document some historical facts: the prevailing items can reveal the lifestyle of individual tribes or cultures. While nomadic ethnic tribes did not create big items, nor very lasting ones; farmers who had already settled made bigger and more elaborate dishes and decorative items; and fighting nations mostly left behind various kinds of weapons. (The Celts, considered to be very peaceful, also had handcuffs, shown among other things exhibited at the castle.)

It was difficult to choose exhibits from remnants, Bartík said, adding that apart from strictly scientific criteria, also aesthetics were included in the selection process. Asked about specialties and unique findings presented, he named the Venus from Moravany (made of mammoth tusk ivory and dated to 22,800 BC), Roman-times golden bracelet from Zohor (whose value is unique in central Europe from an art-craft viewpoint), golden appliqués from Tibava (around 4,000 BC), complete set of dishes from Očkov burial mound (around 1,200 BC),  golden treasure from Barca (around 1,600 BC); or, from later times of Great Morava, the mighty sword – probably of a prince, the remnant of which is displayed alongside a replica.

The territory of Slovakia saw quite turbulent times, thanks to its geographical location and its importance within Europe. During Roman times, the Danube river formed a natural border between the Roman Empire (to the south of it) and areas inhabited by “barbaric” Germanic tribes; forming thus a divide between two whole civilisations. So it happened that e.g. the Gerulata was a Roman military camp near Rusovce (currently a borough of the capital), while only a few kilometres away, Germanic settlements existed. 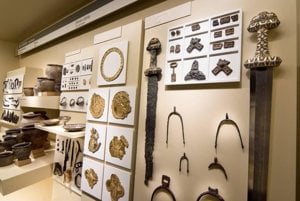 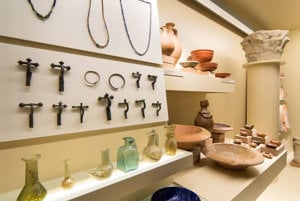 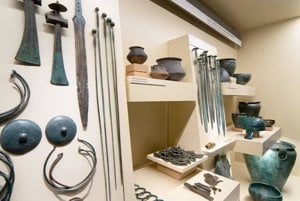 History of Slovakia exhibition in the SNM in Bratislava (4 photos)

Later, the Pannonian Basin repeatedly became the site where nomadic tribes from Asia arrived and, finding a huge opposition and literally “a wall” that stopped them, having nowhere to continue were forced either to extinction or to settle and assimilate. This happened also after the end of Great Morava which “imploded in itself”, according to Bartík, and left the scene to the early Hungarian kingdom.

The next parts of the History of Slovakia, to cover the Middle Ages and modern history of the country, will be gradually opened later, “hopefully by the 100th anniversary of the creation of Czechoslovakia” in 2018, Panis said. When complete, the exhibition will cover one full floor of the Bratislava Castle.

The descriptions of exhibits are also in English and there is also a bilingual concertina book available. Later, a catalogue will also be added.