Police officers depart for Greece to help with migration crisis

Slovak police officers will assist in coping with the migration crisis. 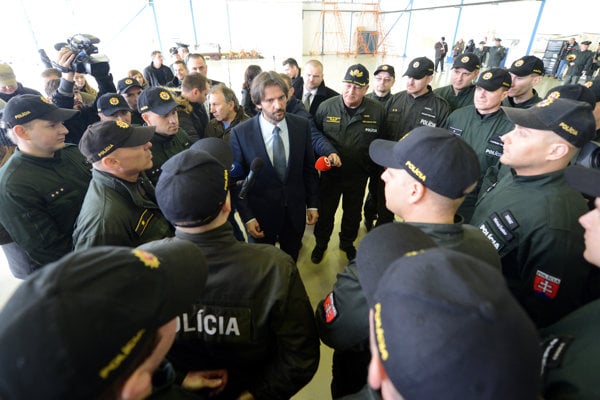 Slovak police officers, 19 men and one woman, departed from Bratislava’s M. R. Štefánik Airport on February en route to Greece in order to assist in coping with the migration crisis, and were seen off by Interior Minister Robert Kaliňák. The police officers will be deployed in Greece with Poseidon – part of the European Union’s Frontex border guard operation. Its tasks will mainly involve registering and fingerprinting migrants.

“Their mission will last a month and will be followed by a rotation, as is the case with other missions,” said Kaliňák as cited by the TASR newswire. “It’s another contribution of Slovakia and a sign of solidarity for the addressing of the biggest migration crisis to afflict Europe since May 2015.”

Kaliňák said that more than 110,000 illegal migrants have entered Europe this year, which is the same number which entered Europe within the first four months of 2015, implying that this year will be more difficult.

Slovak police officers are currently assisting with protection of borders in the Former Yugoslav Republic of Macedonia (FYROM) and Slovenia, and they have also been on duty in Hungary.

According to Kaliňák, countries of the Visegrad Four (the Czech Republic, Hungary, Poland, Slovakia) have called for all illegal migrants – meaning those who do not enter the asylum procedure – to be detained and sent back to Turkey if they entered from there, as that is the basis of an agreement between Turkey and the European Union.

“When this starts working then we can say that we will handle the illegal migration better than last year,” said Kaliňák.

According to the police officers, they are also interested in cooperation with colleagues from other EU countries.

“We are 20 police officers that have gone through a selection process that also featured knowledge of English,” said Rastislav Fedorko, one of the police officers headed for Greece. “It motivated me to try something new, to enhance my work experience.”