Milk producers: Midia Agro can save us amid milk crisis

Cabinet to discuss allocation of investment aid on Wednesday. 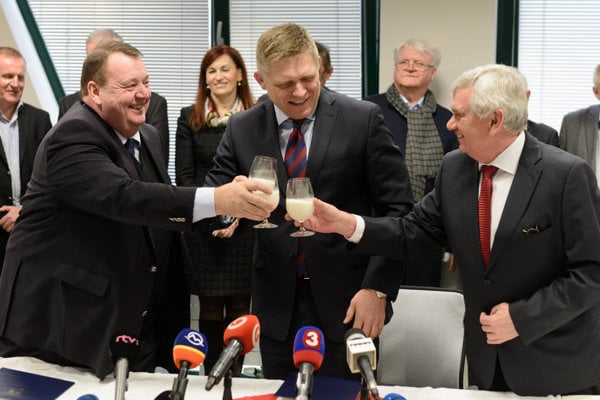 The plans of British company Midia Agro to build a new plant for milk processing near Nitra may save Slovak primary milk producers and the stock of dairy cows in the country. With these words Margita Štefániková, the chair of the Slovak Association of Primary Milk Producers (SZPM) commented on signing of a memorandum of understanding.

Prime Minister Robert Fico and Agriculture and Rural Development Minister Ľubomír Jahnátek signed on February 29 a memorandum of understanding with Midia Agro concerning an investment worth €98 million. The investment should create 320 new jobs in an industrial park near the village of Cab (Nitra region), the TASR newswire wrote.

Štefániková noted that the investment is coming at a time when Slovak and European primary milk producers are experiencing an escalating milk crisis as prices have plummetted. SZPM chairman Alexander Pastorek pointed out that the milk crisis resembles a similar crisis from 2009, with certain dairies terminating contracts with milk suppliers.

“A new stable customer provides prospects for milk producers that they need not shut down production,” said Pastorek.

Midia Agro plans to process as much as 25 percent of the milk produced in Slovakia.

The Slovak cabinet will discuss during its final session of its term on March 2 investment aid of €18.5 million, of which €16.5 million will be support for tangible assets and €2 million will be in tax relief, Prime Minister Robert Fico elaborated.

The total stock of Slovak dairy cows currently stands at 135,000, down by 70,000 from five years ago. The decline was caused by the aforementioned milk crisis of 2009. Nevertheless, Pastorek believes that farmers will react to the presence of a new milk-processing company by again increasing the stock of dairy cows.

Midia Agro will produce milk-based children’s products intended for the Asian market. Production is to be launched in the first quarter of 2018. According to Midia Agro representative Norman Patrick Turner, who signed the memorandum, the company has begun discussions in China, where it is expected to supply five various clients.