Votes can help party but also harm it

Member of the European Parliament Ivan Štefanec (ex-Slovak Democratic and Christian Union-SDKÚ) can thank also Smer voters for his chair. If fewer people had gone to the ballot boxes two years ago, Ján Hudacký of the Christian Democratic Movement (KDH) would have gone to Strasbourg. 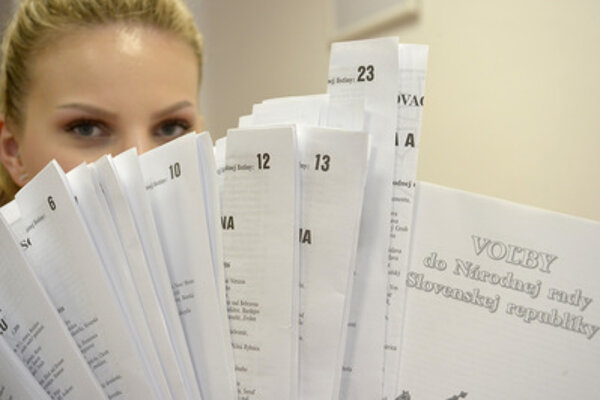 How is this possible? Political analyst of the Prešov University, Vladimír Dančišin, explained the election mathematics for the Sme daily.

Sme: Can a single vote influence whether the party gets into parliament, or whether it gets another mandate?

VD: Theoretically, it can. One vote has the potential to impact the election results. But if we look at it realistically, this is extremely improbable in national elections.

SME: How many votes can, in our conditions, decide whether a party gets one more mandate?

VD: For example, the 2012 election results would not change even if any party lost 5,000 votes. No party would get a mandate, either, even if it gained 5,000 more votes.

SME: Did a party receive a parliamentary mandate by a close margin?

VD: Since one constituency was introduced in 1998, SDKÚ had the closest margin in 2010. Absence of 1,491 voters would then have robbed it of one mandate. And Most-Híd was closest to one more mandate in the 2010 elections; a mere 1,257 votes would have sufficed.

Sme: How are the votes converted into mandates in Slovakia?

VD: The total number of valid votes for each party is divided by the national election number [the number of votes received by all parties that made it to parliament, divided by 151 and rounded off to a whole number]. The political party gets as many mandates as how many times the national election number is contained in the grand total of valid votes for that party. The remaining mandates are divided gradually among those parties which have the highest remainder of the division.

We can compare it to a situation when three buyers strive to buy five wines. They have at their disposal €10, €7 and €6. The seller sets the price at four euros. The first one buys two bottles of wine, the second and third buyer one each. Then the merchant decides to sell also the last bottle. The one who has most money left gets it. In our case, the second buyer would have the most leftover; thus, the last wine would be sold for three euros. All wines were sold, and the first and the second buyer have two euros left, each.

Sme: This seems quite fair.

VD: But in the election process, this is not quite a fair system. The main problem is that unlike our example, the party cannot keep the unused votes for the next election. What it cannot use, will get lost. The election system knows, though, even before the re-dividing, how many votes parties received and how mandates must be divided. The national election number, i.e. the value of one mandate, should be set in a way to re-divide all mandates in a single mathematical operation.

The wine merchant should have set the price at €3.50 form the very beginning. He knows how much money clients have, and he wants to sell all five bottles. Thus, he can sell all the wine without any need to reduce the price for the unsold bottle. Based on this principle, the most used method of re-dividing votes is based – D’Hondt’s method.

Sme: So the way in which votes are translated into mandates in Slovakia is not a just one?

VD: In the US, expert committees with top mathematicians were established – like John von Neumann or Marston Morse – who evaluated individual methods. These scientists did not even admit the possibility of using a method as we have in Slovakia. It was absolutely unacceptable for them. They only considered methods which do not cause election paradoxes.

Sme: In 2014, MPs debated a change in re-dividing mandates. Why did it never materialise?

VD: In 2014, I prepared two proposals for opposition politicians from Freedom and Solidarity (SaS) for how this problem could be solved. One of the proposals counted on a method neutral towards political parties: the conversion of votes puts at disadvantage neither bigger, nor smaller parties. The political right liked this method, due to the voters’ support.

The second proposal stemmed form a very popular, and widely used elsewhere, method which, however, puts bigger parties at advantage. This was preferred, on the other hand, by Smer representatives. But rightist politicians felt it to be a problem, as they did not want it to help Smer easily obtain another mandate. Finally, the proposal was not passed and Smer planned to table its own solution; but this never happened.

Sme: You write on your blog that a voter can indirectly support another party. How?

VD: This is a problem caused by poor setting of the re-division of mandates. A good example is the European Parliament election: if we look at the results from 2014, we can see that a potential absence of 20,000 Smer voters would not harm it. However, SDKÚ would lose –because of the absence of Smer voters – one mandate. KDH, on the contrary, would be better off.

In 2009, a reverse situation occurred. Thus, our election system includes the risk that voters can support – through their attendance – a party they do not prefer.

Sme: How is this possible?

In the elections, KDH and SDKÚ managed to comprise the election number 2.36-times and 1.38-times respectively. By subtracting 20,000 votes of Smer, the national election number shrinks. In this case, KDH would be able to comprise the quota 2.47-times; and SDKÚ only 1.45-times. KDH would have a bigger remainder, which would allow it to get one mandate more. Such a setting of an election system is not good. It should be absolutely excluded. A voter opting for Most-Híd or SaS should never have the feeling that by his participation in the election, he can help Smer or the Slovak National Party (SNS) to more mandates.

Sme: Thus. in some cases, the MP can thank voters of other parties for being elected?

VD: Basically, yes. One can say, for example, that SDKÚ MEP Ivan Štefanec was elected in 2014 also thanks to Smer voters. If several thousand less of them had gone to the ballot boxes, Ján Hudacký of KDH would have been elected.

Sme: So it means that me as a voter can both help and harm the party I am going to elect?

VD: Today, nobody can guarantee that a voter’s vote will not have a negative impact; which can cause a specific party losing one mandate by his voting for it. A vote can help the party, harm it, or help any other party. And this is certainly not a good setting of an election system.

Sme: What is an election paradox?

VD: An election paradox can be considered the result of the Slovak Communist Party (KSS) in 2002. The party received 11 mandates. If only 148 mandates were re-divided, however, it would have gained 12 mandates. And this does not make sense. Many similar paradoxes can be found in election results. For example, in 2012, KDH would have been better off, had other parties been a bit more successful. In that case, it could have lost several votes; but it would get one mandate more, anyway. Thus, the election paradox is an unexpected, surprising, often shocking result which defies our intuitive idea about how things should be.

Sme: And what about votes for parties which do not make it into parliament? Are they lost? Whom do they help?

VD: They are not taken into consideration at all. This election system ignores such votes. Non-voters and voters of parties which did not get chairs in parliament ultimately help all parties which have exceeded the election quorum. The more non-voters or lost votes, the more parliamentary parties improve their result relatively to the number of votes received. Thus, the bigger a party, the more it wishes as many votes lost as possible. If a voter does not go to the ballot boxes, the election system supposes he has the same opinion as those who elected parties that made it to parliament.

Sme: Which of the neighbouring countries has a more just system of re-dividing the votes?

Sme: How should the system be set to prevent election paradoxes?

VD: It would be enough if the law stipulated that if not all mandates have been divided by this method, the state committee will distribute them gradually to those political parties which have the biggest average of votes. This average would be calculated in the way that the total number of valid votes for parties would be divided by the number of mandates already allocated plus one.

Sme: What effect do the ballots have that are wilfully destroyed by dissatisfied voters and then cast in the boxes?

VD: The election system cannot meaningfully use such information from a voter. It will influence election results in no way, whether there are ten, or one million invalid votes.