SIX MONTHS after the dual education scheme was launched the feedback is good, and more companies are expected to join next year. 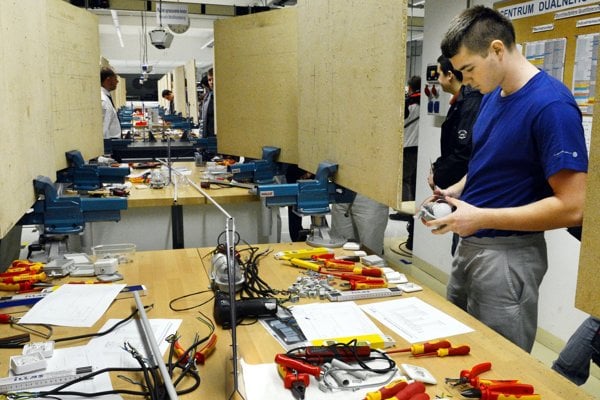 This stems from the evaluation of the Slovak-German Chamber of Commerce and Industry (DSIHK). The chamber, however, still sees room for improvement.

SNOPK evaluates the acquisition of students as the biggest challenge and believes that schools should get higher financial stimuli to set up such classes, while companies should pay lower taxes and contributions.

“We have very good experience and very good feedback from firms for the first six months after dual education was launched,” DSIHK’s vocational education section head Željka Šenkovič said, as quoted by the TASR newswire.

She considers the initial results very encouraging as there is high demand on the part of firms that want to join it as of next year.

“The list of companies contacting us in this connection doesn’t include only firms engaged in the automotive and engineering industries,” Šenkovič continued. “There are other sectors, as well, such as trade, services, the footwear industry and logistics.”

She described the law on vocational education as a step in the right direction, although she sees several flaws in it. The chamber believes that the ongoing education of teachers should improve and that the tax and contributions burden of companies involved in it should be lowered. Therefore, it plans to carry out a survey among firms after the general election on March 5 and then approach the new government with specific conditions.

The hardest nut to crack is to acquire students for dual education, i.e. to persuade parents of the advantages of this system, stated Šenkovič. Therefore, the chamber has developed the DUALpro quality brand, which should guarantee high-quality education in line with German standards.

Footwear-maker Gabor based in Bánovce nad Bebravou (Trenčín Region) will join the system as of the 2016-201717 school year.

“We want to resume, boost and maintain the shoe-making tradition, which is impossible without qualified workers,” company’s authorised representative Juraj Vodička said, as quoted by TASR. “Our employees are mostly approaching retirement age, and so it’s a must for us to find replacements if we want to maintain our position.”

Slovakia’s largest carmaker Volkswagen Slovakia will join the programme as of September with its Dual Academy, which will be set up on the premises of the Secondary Automotive Vocational School in the Bratislava borough of Devínska Nová Ves and will instruct 100 students. Practical education will make up 70 percent of the curriculum. The company plans to invest €9 million into the project, TASR reported.