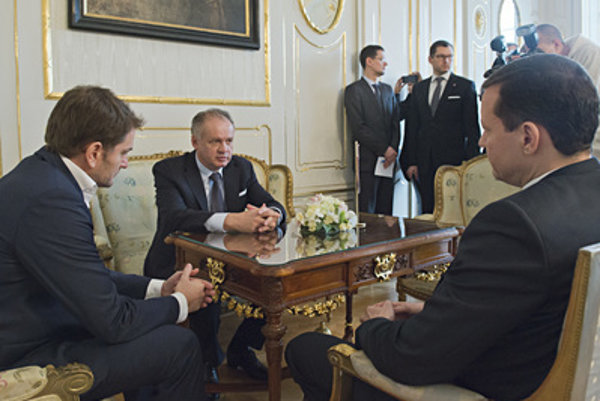 On March 7, Kiska announced at a press conference that he will ask Fico on March 8 to form a new government, and also admitted, as quoted by the TASR newswire, that the situation emerging after the election is complicated.

Kiska opined that probably everyone in Slovakia was surprised by the election outcome: “We have different results than had been expected by the parties themselves,” he said. “We have several new parties in parliament and we will also have there radical political extremism in uniforms.”

There are several dividing lines between individual parties, he added, and while some cannot be overcome – and it would not even be right to overcome them – other can and should be, albeit with difficulties.

Kiska plans to meet six party leaders on the same day; while he did not invite head of People’s Party-Our Slovakia (ĽSNS) Marian Kotleba, PM Fico left for the European Union summit in Brussels, and will meet with Kiska on the morning of March 8. The six leaders visiting him on March 7 (from 10:00) include Richard Sulík (Freedom and Solidarity / SaS), Igor Matovič (Ordinary People and Independent Personalities-NOVA / OĽaNO-NOVA), Béla Bugár (Bridge / Most-Híd), Andrej Danko (Slovak National Party / SNS), Boris Kollár (We Are Family / Sme rodina) and Radoslav Procházka (Network / Sieť).

“I want to know how the party chairmen see the possibility of putting together a stable majority,” president said. “The situation is complex, and that is why I don’t want to process systematically, so that we can gradually find out what are the possibilities and what are not.” The president summed up that voters have been sending a message to politicians for some time already that we need to dramatically increase the trust of voters in the state. “This time, they said it so loudly and so clearly that it cannot be ignored,” he opined. “I don’t think that values are threatened in Slovakia; but people express expectations that these values will bring specific results for their everyday life.” He added that the country needs both the government and opposition to work together to convince people that they do not have to go to the elections only to protest.

The options offered for this post-election situation by the Slovak Constitution include the president assigning the chairman of the winning party to form a government – and then either appointing this proposed government or assigning someone else to do so, the Sme daily wrote on March 7. If the new government fails to win the confidence of the parliament, the president will remove it – and the old cabinet will rule until a new one is appointed but with limited powers. The new speaker of parliament would announce the date of an early election.

If the president does not believe the politicians, or if none of the political leaders is able to form a government, the president could appoint a caretaker one but a new general election would follow, anyway. After a constitutive parliamentary session, political parties can agree that they will try to bypass the president in the procedure if they manage to put together at least 90 MPs and adopt a law on shortening the election term, the speaker of parliament can announce a new election, according to Sme.