Far-right to get money from the state 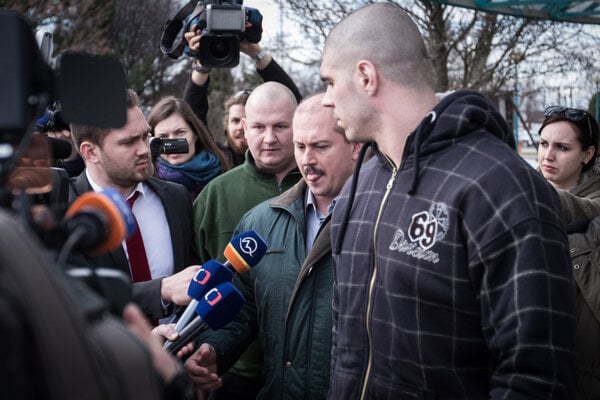 Marian Kotleba, in the middle, accompanied by his associates. (Source: Sme)
Font size:A-|A+

Good results in parliamentary elections do not mean only seats in parliament or cabinet but also financial support from state coffers. Each party that received more than 3 percent of votes will get a sum equaling 2 percent of the average nominal wage from the last year before elections as well as those making it to parliament will get additional subsidies for their MPs. This means that the far-right People’s Party-Our Slovakia (ĽSNS) chaired by Marian Kotleba will receive more than €5 million, the Sme daily estimated.

While the state subsidized eight political parties so far, after the March 5 elections it will led financial support to 10 parties including ĽSNS; which will get money from the state for the first time.

The Slovak Statistics Office will release the average nominal wage for 2015 on March 8, while the National Bank of Slovakia has estimated it at €882.

Based on the estimate, the parties will receive 1 percent or €8.82 per ballot cast and an additional €8.82 for their operation. The state will pay out these contributions in two portions - the first one shortly after elections and the second one gradually over the following four years.

Those parties, that passed the 5-percent threshold, will get a contribution for mandates in parliament. Parties with less than 20 mandates will get €26,460, i.e. 30-fold of the nominal average wage in 2015, annually during the next four years. Those having more than 20 MPs will get 20-fold of the nominal average wage, i.e. €17,640, while this lower subsidy will pertain to Smer and Freedom and Solidarity (SaS) parties. ĽSNS will get €1.48 million for its 14 MPs.

In total the state will pay about €60 million to political parties during the following four years, while it was €48 million during the previous election term.

The reason why the state should subsidize political parties is that otherwise they will be financed by oligarchs, who then would seek to push their own interests through via the parties, Sme wrote citing Grigorij Mesežnikov.