AN AVERAGE politician campaigning in the regions comes to a village, gives presents, smiles and then departs after 30 minutes. Marian Kotleba’s loyalists were ready to leave their job, roll up their sleeves and help repair a flooded cellar. 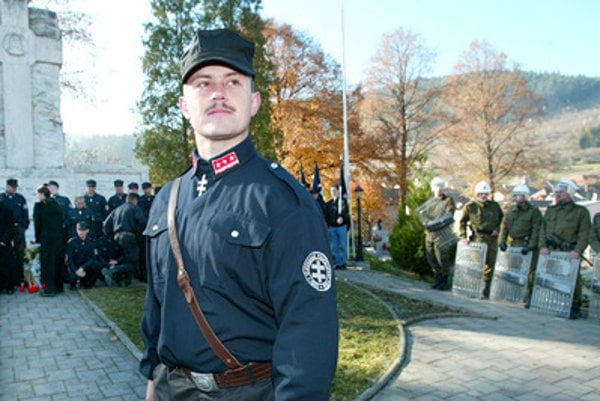 Radovan Bránik, the founder of crisis team Modrý anjel (Blue Angel) which assists during accidents, has been observing the Slovak far-right scene for a long time and met Marian Kotleba’s people several times removing debris after an accident.

“I must admit that no other political party or any organisation has been able to persuade voters in such effective way,” Bránik told The Slovak Spectator. “You can never persuade a person – whose damaged house was under restoration for three days by those guys – that Kotleba is bad.”

Bránik comments come amid the surprising general election results for the far-right People’s Party – Our Slovakia (ĽSNS) reaching 8.04 percent of votes which is enough to get 14 seats in Slovak parliament. February 2016 polls showed support for Kotleba, who is now serving as Banská Bystrica regional governor, reaching about 2 percent support.

Available data shows that many of voters of Kotleba’s party are young people who have never exercised their right to vote before, manual labourers and former voters of Smer party which have been at the helm of government for eight of ten past years. Just 8 percent of Kotleba’s voters said they backed the ĽSNS because of the migration crisis.

“Kotleba’s party in parliament is result of chronic social and economic insecurity, lack of perspectives and chronic lack of integrating values in our society,” Zuzana Kusá, a sociologist with the Slovak Academy of Sciences told The Slovak Spectator. “This situation has no simple or quick solution.”

Data of Statistic Office shows that Kotleba received support in almost all districts in Slovakia reaching between 6 to 13 percent of voters which is enough to move into parliament.

“This reveal can reflect the fact that party got support of first-time voters, protest voters or former non-voters who are relatively equally present in most of regions,” Tibor Madleňák told The Slovak Spectator.

The most of ĽSNS voters have not voted in recent elections or voted small parties (34 percent). Many of them voted Smer (18.5 percent) four years ago.

Kotleba has been communicating with people in simple and populist way, according to social psychologist Alena Chudžíková of Centre for Ethnic and Culture Research (CVEK).

“Even Smer tries to use similar communication Kotleba is closer to people and he does not have corruption scandals,” Chudžíková told The Slovak Spectator.

During election night Focus polling agency published exit poll showing that 17.3 percent of ĽSNS voters have never voted before. If this percentage is applied to official election results where ĽSNS received around 209,000 votes it means that approximately 36,000 of votes Kotleba’s party received comes from first-voters. To compare, following Freedom and Solidarity party received around 21,000 votes from people who have never voted before. Such votes usually come from people between aged 18-21.

The young people see the massive leaving of their friends and relatives abroad for study or work as well as problems with leaving their parents’ household due to insufficient finances,  Kusá said.

“Besides frustration at the lack of opportunity the reason behind such votes is also poor education system and its ability to teach young people about human ideals such as respecting every human being, solidarity or helping the weak.”

Kotleba has pushed the boundaries of the law with anti-minority rhetoric. He has organised marches of people wearing uniforms resembling the uniform of the Hlinka Guard, a wartime Fascist organization in Slovakia. His previous party was disbanded after Counstitutional Court found that party’s program is violating the constitution. Even it is hard to admit for Kotleba’s voters, they had to know that they are supporting extremism, according to Grigorij Mesežnikov, the head of the Institute for Public Affairs think tank.

He refers on the study named Demand for Right-Wing Extremism Index (DEREX) which checks prejudice and welfare chauvinism, anti-establishment attitudes, right-wing value orientation and fear, distrust and pessimism among surveyed people. It showed that almost 11 percent of Slovak citizens are potential supporters of right-wing extremist groups in 2013.

“Exactly those people are among Kotleba’s voters,” Mesežnikov told The Slovak Spectator.

Kusá, however, disagrees that Slovaks inherited fascist attitudes from the past. The tolerance towards disrespect of some ethnic groups or religions and tendency of people to cast out some minorities from society is result of poverty, insecurity and lack of values, according to her.

Kotleba is currently not representing real anti-democratic extremists but rather frustrated protest voters who have no one else to vote for. He lost support of Neo-Nazis and anti-democratic people in 2015 after he tricked and humiliated their leaders who are not well-known in public but have big respect in Slovak far-right groups. They will try to unite in next elections, according to Bránik.

“The number of voters which Kotleba gained is high but the real capacity of this group is two times higher,” Bránik said. “We would talk about him as the head of second strongest party.”

Peter Bročka is an activist who ran for mayor in Trnava in 2014. He had a minimalist campaign running mostly among common people and on social networks. Despite such approach he was more successful than any other regular and presumably stronger candidates with more expensive campaign and won the election. Together with other activists he was cleaning parks, cutting the grass, repairing benches or reconstructing playgrounds.

Kotleba uses similar tactics in even more successful way, according to Bránik.

“He is visiting common people, shaking their hands asking how they are doing; it is like following textbook for US politicians,” Bránik said.

He added that there is paradoxical situation in Slovakia because the ecological agenda usually embraced by left-wing and liberal groups is most effectively used by extremists.

“Only those guys are doing honest ecological activism without European funds or support from any embassy,” Bránik said. "There is perhaps no politician who has shaken hands with more common people than Kotleba.”

Kotleba’s success is probably the result of several trends in Slovak politics and society. The main pre-election issue was for a long time migrant crisis and parties who emphasised anti-migration rhetoric now comprise 60 percent of parliament. Another issue is strong anti-establishment feelings among people and parties such as ĽS-NS, OĽaNO a Sme Rodina (We are familly) which reached 25 percent of seats in parliament, according to Tomáš Nociar, a political scientist focusing on far-right parties.

“The cross connection of those two issues namely anti-migrants and anti-establishment – which seems like winning combination in recent elections – can be seen as primary reason of success of ĽS-NS,” Nociar told The Slovak Spectator.

Another reason is that ruling Smer has not clearly cast ĽS-NS out of political mainstream and responded only on most excessive situations such as possible pogrom or at least an ethnic clash between Kotleba’s supporters and Roma in Saririššské Michaľany village in 2009.

After Kotleba became head of Banská Bystrica region many were forecasting that he will loose his support due to scandals.

Most of them were related to nepotism which ultimately resulted in National Labour Inspectorate stating that his region (BBSK) has become an illegal employer not eligible for money from European-Union (EU) funds.

Despite these scandals Kotleba received above-average support in the region reaching 9.3 percent in Banská Bystrica city and 14.5 percent in neighbouring town of Brezno.

Kotleba was able to explain such scandals as and attempt by the government to discredit him, according to Chudžíková.

“Whether someone cooperated with him or not Kotleba was able to turn the situation in a way that people were impressed,” she said.

After the March 5 elections Slovakia became third EU country with and extreme far-right party in parliament together with Greece and Hungary.

There are however other soft far-right parties present in EU parliaments and in some cases they have support from 20 to 30 percent of voters. Slovak National Party (SNS) which returned to parliament could be example of such a party, according to Nociar.

He went on that there other countries such as Portugal, Spain or Ireland where far-right groups are totally marginal.

“It is specific for Slovakia that two far right parties will be in parliament - softer SNS and more extreme ĽSNS,” Nociar told The Slovak Spectator.