The Christian Democrats have a chance to return to the top tier of parties, but need changes. 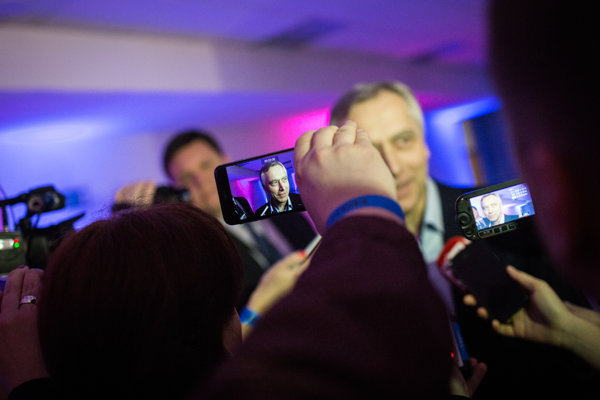 ROUGHLY 1,600 more votes is all the Christian Democrats needed to make it to the national parliament. If they do not want to sink into oblivion and return to the house in the future, they need to think about several changes, either to their image or their agenda, political analysts agree.

The Christian Democratic Movement (KDH) took just 4.96 percent of the vote in the March 5 general election. As a result, they did not win any seats in the parliament for the first time since they were established in 1990.

While support for the Slovak Democratic and Christian Union (SDKÚ) evaporated (it received only 0.26 percent of the vote), Sieť only barely made it into the house (winning the support of 5.6 percent) and KDH failed to reach parliament, he noted.

Following the KDH’s poor result, Ján Figeľ announced on March 15 that he would resign as leader. However, his decision came more than a week after the election, for which slowness he was criticised by political analysts.

It supported democratic principles, had predictable behaviour and a clearly defined ideology, as well as a certain place in society, says political scientist Juraj Marušiak of the Slovak Academy of Sciences.

The stability of its voter-base even allowed the KDH to nurture sub-groups, Marušiak told The Slovak Spectator, “as it had strong positions in families, there is also a youth organisation running alongside it.”

Though KDH tried to establish itself on the Christian-democratic principles known in western Europe, there were certain differences. For example, it had stronger links to the Catholic church.

“The party promoted principles which seemed to belong to the past,” Kusý said, listing as an example the party’s opposition to same-sex marriage. Moreover, it was rather careful in its opinions on disputes concerning the Catholic church in Slovakia.

“The western Christian democratic parties are more focused on people living in the countryside and small towns and they support the model of a social market economy,” Marušiak added.

The KDH and its representatives played an important role in the 1990s when they were part of the opposition to then-prime minister Vladimír Mečiar. Back in 1998, the KDH leader even withdrew in favour of Mikuláš Dzurinda, who later became prime minister, Marušiak pointed out.

On the other hand, KDH disagreed with any alternative personalities or programmes. This spurred a mass of defections in recent years as well blocking changes to its programme or image.

“KDH has lost its identity,” Marušiak said. “Its liberal economic and social programme was far from the problems of its electorate.”

After losing economic experts, the party took up other agendas. Moreover, the party lost its political initiative in recent years and only responded to Christian activities in the third sector.

“They were emptied from the point of values, programme and personalities,” Marušiak said, adding that none of KDH’s attempts to attract voters had worked.

One of the last controversies connected with the party was a proposal to punish abortion with a prison sentence. This was too strong for the stable voters of the party, according to Marušiak.

Moreover, KDH was not the only party promoting a pro-life agenda. It also has supporters in Ordinary People and Independent Personalities (OĽaNO) and the far-right People’s Party – Our Slovakia (ĽSNS), he added.

Pavel Haulík of the MVK polling agency opined that many KDH voters picked OĽaNO or ĽSNS in the recent vote, but also the newly-established Sme Rodina (We Are Family) of Boris Kollár.

Figeľ is a weak leader

KDH has also struggled to introduce new personalities. Due to the party’s internal problems, several of its members have left over time. These included Dzurinda, Vladimír Palko, František Mikloško, as well as Daniel Lipšic and Radoslav Procházka, Marušiak continued.

“All these personalities have left as they perceived its policies to be too conservative, static and maladjusted,” Kusý told The Slovak Spectator.

Most of them established their own political parties.

Not even KDH chair Figeľ was strong enough to attract voters. Due to his political pedigree and the previous functions he had held (as Slovakia’s main negotiator with the European Union, and then as European Commissioner), he was expected to have a good position in the KDH.

“However, he lost many supporters after he failed to manage his personal and absolutely unnecessary scandals,” Marušiak said.

He referred to cases in which Figeľ, despite being a former European Commissioner, obtained a flat under very favourable conditions, or when he was granted a PhD title under dubious circumstances.

Kusý says that Figeľ was not a charismatic personality or the type of leader who would come up with new ideas.

Baránek sees another problem in the decline of Christian democracy in Slovakia. In the past four years, two new parties have been established by people who have left the KDH: NOVA (led by Lipšic) and Sieť (led by Procházka). OĽaNO also has members promoting the same principles as KDH.

“I consider this a cardinal mistake,” Baránek told RTVS.

Political analysts agree that it is necessary to have a party presenting Christian democratic values. The KDH still has supporters, but it will have to adopt several changes to make it back into parliament. One of these is to focus more on social policy, Marušiak said.

This, however, cannot be done under the current leadership. The party needs new faces with more modern Christian democratic thinking, added Kusý.

Most of the current leadership will offer to resign their positions at an assembly summoned for March 19. Analysts were surprised by this decision.

“Such lack of self-reflection is not extraordinary in Slovak politics, but this extent is unbelievable,” Marušiak said, adding that both KDH leaders and the party’s supporters blame everybody but themselves for the election failure.

Analysts agree that the leaders must admit responsibility for the current state and draw consequences.

“KDH will need a good airing,” Haulík said. He does not believe the party will end – it will be back in the next elections, but “it’s definitely going to be a different KDH – it will have to be”.

Marušiak, however, says that the party has been ransacked both personally and ideologically, so it is not clear whether there will be anybody left to revitalise it.