Individual modules of BE batteries can be put together and interconnected into big units. 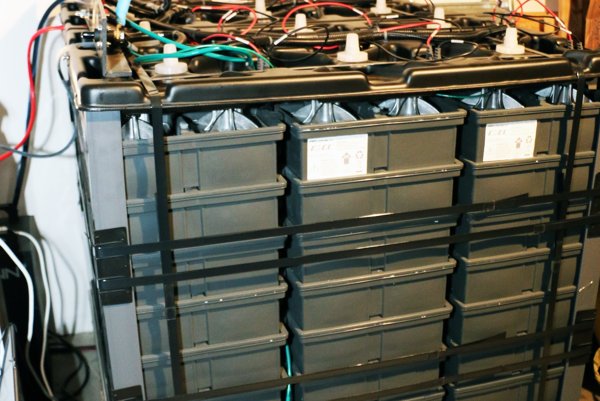 SPECIAL Blue Energy (BE) new generation batteries, to store electric power with high efficiency, function on unconventional chemical components – manganese dioxide, carbon and saltwater; with industrial cotton used as a separator. For almost a year, the Bratislava-based Emel company has been testing them in Slovakia.

“Their advantage when compared to currently used lithium or lead batteries is the fact that they are non-flammable, explosion-proof, non-toxic and recyclable,” CEO of the company, Ľudovít Hamaš, explained for the TASR newswire.

The effectiveness of BE batteries is 85 percent, while with other types, it is 70 percent. Moreover, their lifespan is long, they can be recharged without being damaged and the number of recharging cycles is 5,000.

“If this possibility is not fully used, but only about 15 percent of energy is used from the batteries, there can be as many as 35,000 such cycles; which prolongs the lifespan to 100 years,” Hamaš added.

Currently, Emel tests a BE battery with capacity of 20 Kilowatt-hours – which is enough for a house using photovoltaic panels, wind turbines or cheaper night power. The goal is to test their reliability and check all declared parameters, according to Hamaš.

“This is the application of a US patent; and these batteries have already started to be manufactured commercially, and so it is not just laboratory tests,” he added. “Their certification is also being made in the Electrotechnical Testing Institute in Prague, according to European norms.”

Individual modules of BE batteries can be put together and interconnected into big units. Emel prepares projects to assemble a set of batteries with capacity of 33,293 MWh. Such sets are very apt for developing countries of South America, Asia and Africa.

Hamaš can imagine the use of BE batteries also in Slovakia: for example when securing relatively cheap electricity for Roma settlements.

He says that if such a module is built close to a settlement, batteries could be re-charged from cheap night electricity. During the day, the stored energy would be used for common consumption in households.

He calculated that only one-tenth of the batteries’ capacity would suffice for that. The rest could be returned to the grid during day energy peak times when the electricity is most expensive, which could bring also an economic effect.

Also the company INTERGEO a.s. Bojnice plans to use them, within projects of building renewable sources of energy. The Bojnice-based company will be the agent of BE batteries representation for Slovakia.

“They combine all necessary qualities,” CEO of the company Michal Bartko said, as cited by TASR. “Compared to lithium or lead batteries, they need no expensive maintenance, and are fully environmentally-friendly.”