THE SEVENTH year of charting the most frequently used words in the newscast in Slovakia saw some of the favourites drop, some stay well-placed against last year, and some new ones appear at the top. 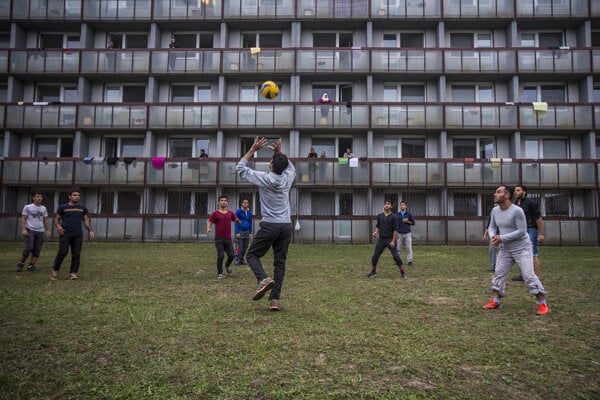 The few refugees that really entered Slovakia, were housed temporarily in Gabčíkovo, in a step to help Austria. (Source: Sme)
Font size:A-|A+1

Ukraine was replaced by the word “refugee” on the first place of the chart compiled annually by the Newton media company. This word was registered 11,769 times in relevant news media in 2015.
“If we add some related or key words to the term refugee – like migrant, refugee crisis, quotas, Schengen – then we get more than 20,000 uses,” Martin Gonda, analyst of Newton Media, told the SITA newswire. He added that in this combined way, the “refugee” issue would even beat the record of Ukraine (from 2014) with 16,000 entries.

Second place went to Prime Minister Robert Fico (with 9,210 entries which is an increase in 1,650 year-by-year). Fico has been on one of top positions for a long time, SITA wrote, partially ascribing it to his position and the fact that even when something happens without his direct involvement, he is expected to comment on it.

The word migrant could be found in more than 7,700 news items and placed fifth; Greece rose from 19th to sixth, as the referendum, general election and influx of refugees often placed it in the news. Health care declined from fifth to seventh although it grew in absolute number of entries by more than 1,600.

The world rodina /family marked a huge rise in publicity (3,660 more) as a political and social issue, rising from place 10 to place 8. The Islamic State jumped from number 17 to number nine last year (increase of 2,788 entries). Place ten went to education system, with more than 5,000 news items.

Some words that were among ten most frequented in 2014 fell 10 places last year: sankcie / sanctions (from 3 to 13) and presidents Vladimir Putin and Andrej Kiska who thus join US President Barack Obama and German Chancellor Angela Merkel (who is in Top 20 for the first time).

Words like korupcia (corruption) and nezamestnanosť (unemployment) are not in the 11-20 group anymore; however, the words corruption grew in 500 entries overall, while unemployment fell in 200 uses.

The Newton Media company elaborated on this chart with quantitative analysis on a sample of relevant news media it monitors: it tipped key words (names of scandals, politicians, other events) that resonated most in 2015 in media. Sport and tabloid events are excluded. One entry meant one occurrence of the key word in a story; repeated occurrence in one story was perceived as one entry.