Sieť and Most inclined to government with Smer, SNS

TWO rightist parties, Sieť and Most-Híd, until now in opposition to joining a coalition with Smer, showed interest in talks on creating a stable government with the winner of the March 5 election, Smer. 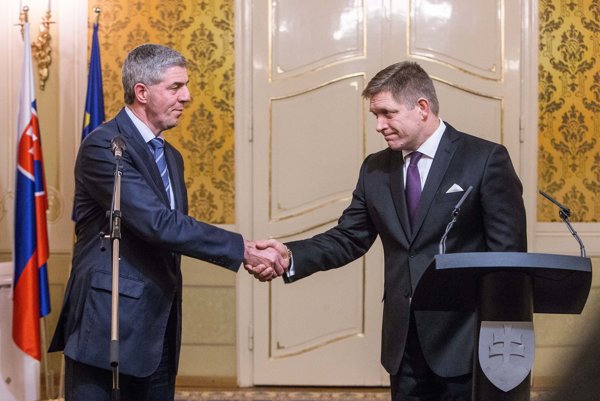 This twist comes after a weekend then the rightist parties failed to form a coalition on their own: chairman of the Slovak National Party (SNS), Andrej Danko, refused a potential "patchwork" rightist coalition.

Smer chairman Robert Fico and Most Híd’s Béla Bugár talked to the press after their joint negotiations on March 13, saying that they continue talks on creating a stable government, but their programme priorities for the possible government manifesto must be debated properly first.

“The first talks have shown that there aren’t such differences that would stop us from continuing the debate,” Fico said, as quoted by the TASR newswire. He added that a further round of talks will take place on March 14.

At the press conference. Bugár confirmed that he too has not found any obstacles that would prevent him from continuing in talks. “We’ll talk more specifically on programme priorities on Monday,” he added. Bugár also said that his party came with proposals and priorities and handed over documents concerning anti-corruption measures, regional and minority goals of his party, as well as its views on European policy. The party chairman said that they have found no point among the priorities that would prevent them from continuing and that on Monday they would speak more specifically on programme priorities.

“We’re now calling on all standard political parties – Smer-SD, Freedom and Solidarity (SaS) and Sieť – to be ready to accept compromises with the aim of stabilising the situation and ensuring a stable government be formed,” Bugár summed up, as quoted by the TASR newswire. “The presidium has rejected to lend support to a caretaker government and a fresh election that would destabilise the situation in society even further.”

Fico also met Sieť chairman Radoslav Procházka on the same day, at their first meeting that tapped their programme priorities and looked – in vain – for issues that could divide them.

Procházka said that for him, the fundamental question is whether the Sieť participation in government could suffice to push through their requirements to which two more were added – to complete the investigation and prosecution team working on the Gorilla scandal, and to give the opposition participation in power control, especially in health care, the Sme daily wrote on its website. Procházka added that his negotiations with Smer were unanimously approved by the party leadership, and refused to speculate whether some members may leave the party. However, a collaboration with the ruling party has not been on the table yet.

Earlier last week, Sieť vice-chair Miroslav Beblavý gave up his post of vice-chair and slammed negotiating with Smer. Another Sieť vice-chair, Katarína Macháčková, said – in reaction to the leadership’s negotiation with Smer – that she would give up her party membership if her party collaborates with the latter.

Most-Híd originally informed it could not imagine sharing power in one cabinet with the nationalist SNS, and earlier last week it also refused negotiations with Smer. They changed their mind after the March 12 SNS congress when it turned out that no rightist government is possible in Sovakia.

As for collaboration with Smer, Bugár said, as quoted by Sme: “If Smer thinks that a stable government is needed, we have expected it to address standard political parties, and if invited, we will participate”.

The Smer chairman said, as well, that his party is interested in creating a stable government, as Slovakia cannot afford chaos and deepening of elements that, to a certain point, deform the political system. In this, he wants to lean on experienced politicians, like Bugár, he said, as quoted by the SITA newswire.

SNS chairman Andrej Danko at the party congress on March 12 stated that it seems that only SNS and Smer would be able to guarantee a stable government. When asked whether this statement should have been understood as a definite No to a rightist government, Danko said, according to TASR, that this means an absolute No to any hybrids and chaos. He added that he is a politician with rightist elements, but SNS would rather opt for a caretaker government than choosing “destruction”.

SaS chairman Richard Sulík said on a TV programme that 81 percent of Most-Híd voters did not like to see the party entering into a Smer government, while the figure among Sieť voters vis-a-vis Smer was 78 percent. Meanwhile, as many as 89 percent of SaS voters rejected cooperation with Smer. “Cooperation with Smer would be devastating for Most-Híd, as it would be for us,” Sulík opined. “If Béla Bugár is OK with this, then fair enough, but I don’t know what Radoslav Procházka will do with this, as he’s spent a lot of energy on creating the party.” He added that if he does not become prime minister, he will remain in the European Parliament and SaS will be a tough opposition to the government.

Bugár then asked Sulík why he should return to his negotiating table, if the right would only have 72 votes in the 150-member parliament without SNS.

On March 14, the ethnicly Hungarian Party of Hungarian Community (SMK) has postponed negotiations with Most-Híd (party of ethnic reconciliation between ethnic Hungarians and Slovaks) originally slated for this day. The reason is that a new government combining the nationalist SNS and Most-Híd, seems to be emerging, SMK informed TASR.