EVEN a hundred years ago, publishers who produced postcards tried to stand out in order to sell more of their goods. 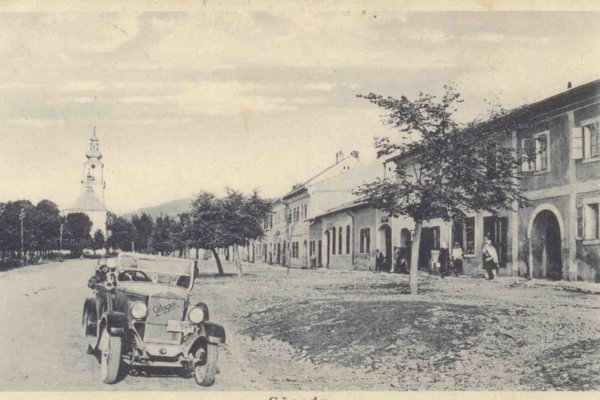 Publisher Bernat Blayer of Stará Ľubovňa did this by placing an automobile before his camera – then a rarity which only very rich people could afford.

It is quite probable that the Praga brand car appeared in the streets of this small town only thanks to an agreement between Mr Blayer and its owner to come for the purpose of a photo and that, in fact, it drove in the streets of a bigger city.

The town is called Hniezdne and it lies in the northern Spiš region, not far from the Polish border. Its interesting name refers to ancient times when a Slavonic settlement used to be here. Hniezdo, meaning nest, in this case is the term for a settled and probably even fortified site. The first written mention stems from 1286, and it mentions a town called Knysen, a Germanised form of the town’s original name, as by that time, a large number of German immigrants had settled there. Gradually, Slovaks merged with the new settlers and Hniezdne became a German town, as did many others in Spiš. And, like other Spiš towns and cities, Hniezdne became part of the Polish pledge for 360 years, as given by Emperor Sigismund of Luxembourg to whom Polish King Wladyslaw II Jagiello lent money for the war against Venice.

The right side of the postcard is lined by walled burgher houses which can be found in smaller towns in Spiš. They have usually two floors and local Germans started building them in the late-renaissance style at the beginning of the 17 th century. Similar houses appeared here in the following century but already in the baroque style.

Visitors to this town are also attracted by valuable murals.