How will Bugár and Procházka rule with someone whose refugee-crisis-time vocabulary could beat any extremist? 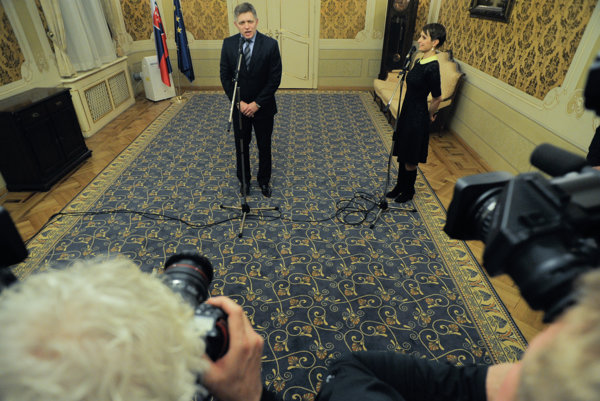 THE VOTER has dealt the cards and compromise has become one of the most often repeated slogans of a game the result of which will have a much more serious consequence for the country than just a Sunday game of canasta.

Nationalist SNS that, since the times it last ruled with Smer and Vladimír Mečiar’s HZDS, changed its façade at most, suddenly co-decides about the character of the future ruling coalition.

And it did not surprise anyone that a party that has scandals from the first term of Robert Fico as prime minister in its CV, now decided to strengthen the hopes for his third government.

Even the rightist parties were willing to digest the presence of SNS in the government, that potential centre-right one, and called on Béla Bugár to overlook that in the past the driving engine of this party was urging the fire of passions against the minorities.

The Most-Híd chairman decided to digest the potential government with SNS. So much so, that he alone joined talks about entering such a government with Smer. And Radoslav Procházka, humiliated by the election results, also negotiates with the party that might be calling for a stable government, but so far remains without self-reflection.

Bugár and Procházka claim that it is their ambition to push through the anti-corruption package, but to do that, Robert Fico would have to admit that his government created a friendly environment for octopuses in health care, nepotism and corruption at all levels of the state administration. Smer would have to change the genetic code it works on: distributing on the basis of party affiliation.

How will Most-Híd promote minority policies with the man whose refugee-crisis-time vocabulary could have beaten any extremist? With the politician who in the past stated that he did not build the state primarily for minorities and his idea of them is that they have “extended hands, but almost minimum cultivation of civic virtues”.

What will Bugár and Procházka do if Robert Fico as a prime minister in their common government won’t communicate with the media, thus ignoring part of his own voters? Or if, driven by the vision of an inflated voter support once again sues some European institution?

Compromise might be an art of politics, but it should in the first place be beneficial to the voters, because if it isn’t, then it will empty the contents of politics, and some politicians too, and the government with Fico might be their swan song.

Not only for them, but also for standard democracy.