On March 14 Slovakia marks the anniversary of the launch of the first independent Slovak state that was created with the backing of Nazi Germany. 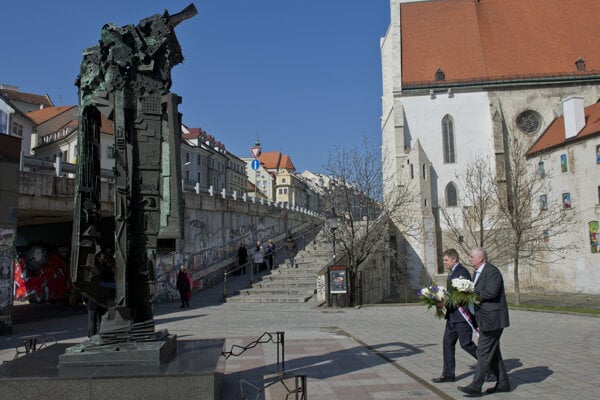 That state, whose president was priest Josef Tiso, is known to have deported some 70,000 Jews to death camps and expropriated their property, then worth billions of Slovak crowns.

This year, on the occasion of the 77th anniversary of the first Slovak state’s founding, Prime Minister Rober Fico laid a wreath on the monument dedicated to Holocaust victims at Rybné Námestie square in Bratislava. It was not so much for the past as for the sake of the present and future that Fico came to pay his respects to the victims.

“Slovakia can be proud of many things,” said Fico as cited by the TASR newswire. “However, there’s one aspect we must never allow to be taken away from us because it’s a fundamental pillar of our statehood and that’s the resistance against fascism.”

Fico voiced his surprise over last week’s general election results seen in some Slovak villages including those in which citizens were killed during the Slovak National Uprising, like Ostrý Grúň in Banská Bystrica Region.

“If the party, whose representative [MP Marian Magat] claims that Hitler was more or less an okay guy and the Holocaust was a hoax, manages to garner almost one-fifth of votes in a village such as Ostrý Grúň... then we should all be on high alert,” Fico said. “The village that was burned down and stands as a symbol of the atrocities committed by fascism.”

“They stand as a memento of the atrocities committed by fascism,” he added.

On the same day three newly elected members of parliament for ĽSNS paid their respects to Slovak state (1939-45) president Jozef Tiso – a priest – on the occasion of the 77th anniversary of its establishment, TV Markíza reported on its website.

Three ĽSNS MPs – Martin Beluský, Natália Grausová and Peter Krupa – commemorated this historical period right at Tiso’s grave at the Martinský cemetery in the Bratislava borough of Ružinov. These legislators did not want to comment on this, reported TV Markíza.