CHAIRMAN of the Christian Democratic Movement (KDH) which fared worse than expected in the March 5 general election and is not in parliament, announced on March 15 that he would resign. 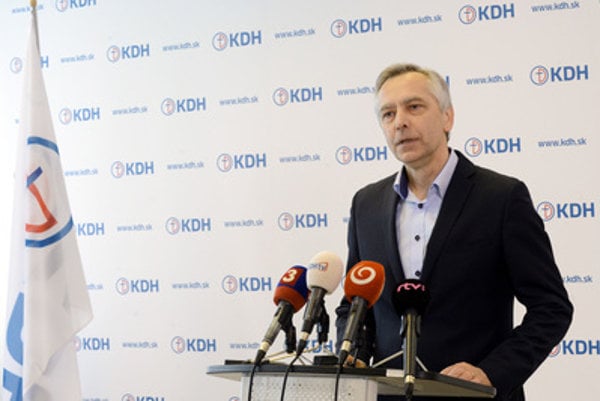 One day earlier, he had already informed the party leadership, he said, adding that he had opted for this step already on March 6. “I made the decision itself already on Sunday after the general election,” Figeľ said, as quoted by the TAST newswire. “But as I am not a fan of policy of dramatic gestures but rather of responsible behaviour, I though it was necessary and sensible to consult further proceeding with colleagues and members of the leadership.” He also recalled he had said before the election that if KDH fails to grow he would not lead it.

KDH finished with 4.94 percent of the votes in the general election, and for the first time in its history, it did not exceed the 5-percent threshold and make it to the parliament. The day after, Figeľ said that he and the whole leadership are ready to draw political responsibility. “After the Saturday (March 5) election, KDH will not be present in the Slovak parliament,” This is the first time in its history, and that is why we consider it a huge failure, this is a historical fact. We want to offer our functions at KDH Council and KDH Congress. The Council will sit on March 19, so that the movement can gain new vitality,” he summed up then.

Asked about the causes behind the election defeat, Figeľ named a whole range of evident reasons. “We want to open this at the KDH Council meeting, and also file an analysis which we will prepare,” he added. Figeľ only said that it was evident that KDH voters left for other parties, new ones or already existing ones. “We failed to address and attract those whom we care about,” the outgoing chairman summed up.

Also the KDH spokeswoman, Natália Žembová, left her job – on March 14. She also ran in the March 5 general election in the 100th place on the KDH slate. Žembová was given the post of spokesperson February 20, 2015, replacing Matej Kováč who left to become the spokesman for Most-Híd. Before that, Žembová worked as a domestic news reporter for public broadcaster RTVS and, as of 2007, as an anchor of the main RTVS TV news show. She made headlines last year by taking part in a TV ad for the Family Alliance in order to promote a referendum on the family. [The ad had an anti-gay adoption message. - ed. note]

Communication will be under the control of Darius Anton Hatok, current head of the KDH communications department.

UPDATED: Until the June KDH Congress, deputy chairman Pavol Zajac was authorised by Figeľ to lead the party.