Most-Híd head seems to have lost respect for voters, political instinct — and his memory too. 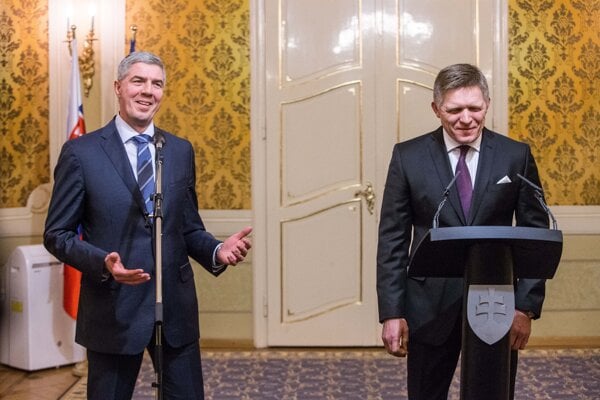 Béla Bugár and Robert Fico share a laugh as they announce they are ready to work together. (Source: Sme - Gabriel Kuchta)
Font size:A-|A+

BÉLA Bugár has always been perceived as a rare sympathetic character on the Slovak political scene.

Unlike Radoslav Procházka, Bugár has always been the type to avoid conflict. He would appear on cameras with his calm voice, serious but smiling, and create the impression that he brought reason into otherwise unreasonable political fights. He liked to talk about gardening and sweets. His phrase, “o tom potom” (that comes after), became proverbial for its time, a mañana-like attitude in the centre of Europe. Things almost never seemed desperate when Bugár spoke about them.

When he and others left the SMK to found Most-Híd, it was a milestone of sorts, an unprecedented attempt at a party that would embrace the cooperation of Slovaks and Hungarians as its core value. The press conference where Bugár announced he was founding his own party was one that emanated good vibes, amid a campaign that the then-ruling coalition headed by Smer used to fuel hate between Slovaks and Hungarians. Over time Bugár did attract considerable support among Slovaks too, enough to overtake SMK and become part of the 2010 elections euphoria that ended the first government of Robert Fico.

He represented the more liberal wing of the SMK, as opposed to the nationalist core of the party with rhetoric that could easily be mistaken for the type of talk coming from the Slovak National Party (SNS). Bugár would have probably found people willing to buy him a beer in any Slovak pub. He has long been among the country’s most popular politicians, and in November 2015 he still topped the rankings.

Bugár also belonged to the major critics of Freedom and Solidarity’s Richard Sulík when the latter decided not to support the eurozone bailout in parliament and thus brought down the Radičova government less than two years into its term. But as an opposition party, neither Most-Híd nor Bugár acted forcefully. They found themselves tangled in the People’s Platform, a grouping of parties that has become synonym for the continued failure of the centre-right opposition to unite.

In his day some observers saw a prime-ministerial or presidential potential in Bugár. Admittedly his chances were limited because he came from a minority group, but Bugár never seemed to mind playing second fiddle. So much so that in the past few years he took on the role of the guy who neither offends nor pleases, the dull one that you go for when all the others turn out to be unacceptable. He seems to have lost not just part of his charisma, but apparently also the respect for his voters and his political instinct — and definitely his memory.

How else could he sign a coalition agreement with Smer and SNS, two parties that never shied away from playing the anti-Hungarian card, once barred the Hungarian president from the country and passed a highly controversial law changing the rules for citizenship?

Back then, when Smer invited SNS to rule the country together, their choice of coalition partner led the European socialists to suspend the party’s membership in their club. Recently, with Prime Minister Robert Fico’s anti-refugee rhetoric, Smer received a warning that something similar might happen again. Having a coalition partner of Hungarian ethnicity is definitely a convenient way for Smer to show how minority-friendly and social-democratic the party is.

On the party’s billboards before the last elections Bugár was touted as the “voice of the reason” and his party insisted that “character decides”. But in the end, reason (the way his voters understood it at least) seems to have failed him, and looking at the people he is going to rule the country with, he apparently did not insist on immaculate character either.

That signature under the coalition agreement might be his last major move on the Slovak political scene. Like Zsolt Simon, the loyal co-founder of Most-Híd who now says he will not enter the party's caucus if they team up with Smer, his voters will likely depart too.