After the steelworks announced a programme of voluntary resignations, more people are likely to leave.

KOŠICE-based company U.S. Steel will cut more than 20 jobs in administration and management due to the prevailing situation on the steel market. The company’s spokesperson Ján Bača did not specify how many people will lose their jobs.

“The overall tally of employees affected will hinge also on production and business conditions and needs,” Bača said, as quoted by the TASR newswire.

According to the Sme daily, the company has offered these people jobs in production.

U.S. Steel Košice says the decision was inspired by the situation in global steel production.

“Particularly in the recent six months, we’ve recorded a massive rise of imported products at extremely low, dumping prices,” Bača said, as quoted by TASR, adding that this development prompted the company management to slim down its organisational management and administration structure. 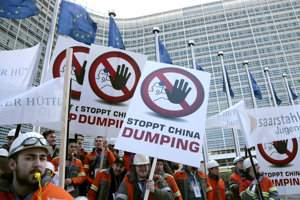 In addition to the abolished 20 jobs, a further 85 employees will voluntarily leave U.S. Steel in the course of the year. They will receive a severance payment for 10 months, amounting to some €19,000, Sme wrote.